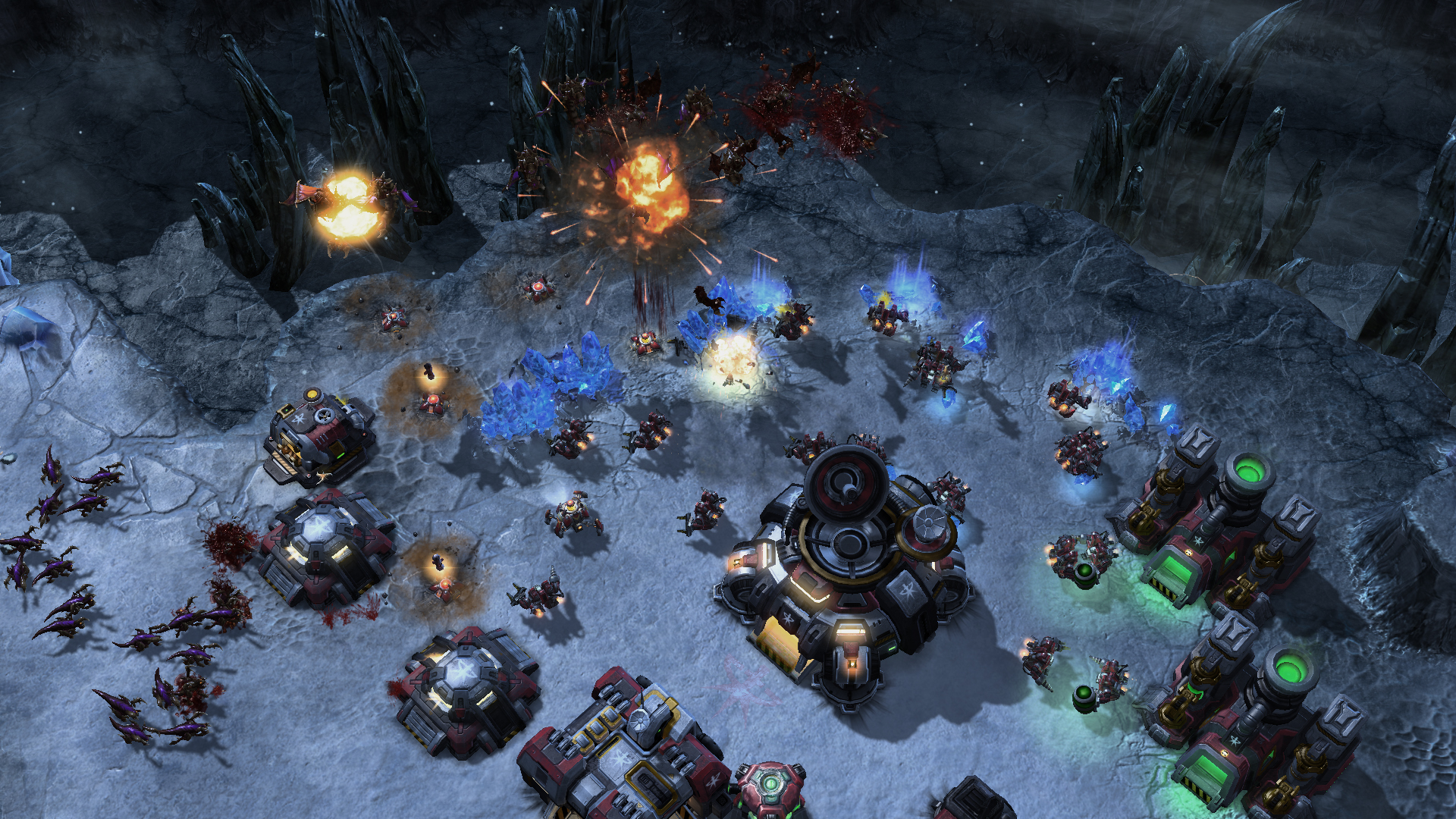 I mentioned this briefly in a previous article and will open again with it here: having played my fair share of strategy and tactics games, I’ve come to this conclusion: if your game removes a facet of the core RTS experience (like base building) it must include additional mechanics/game systems of at least comparable complexity and depth to account for this removal. Base building, for instance, provides the player with a large array of decisions related to production capacity, unit upgrade level, income and unit type availability, to say nothing of the spacial and temporal decision making involved in choosing which buildings to place, where, and when to construct them.

Base building is a core component of most classic (and, all internet whining on the subject to the contrary) modern real-time strategy games. Any game which would seek to minimize or remove this core aspect of the RTS genre, in my mind, needs to find ways to overcome the inherent mechanical simplification by giving the player more things to think about and do rather than build buildings. A game which fails to do this will feel sparse to the player, who will soon abandon it.

Boiled down to its essence, my philosophy could be summarized thusly: the more options players have to succeed in an RTS game, the more players will engage with that game. There are a number of facets to this, but I’d like to look at game economies first.

I think that economic nuance is something that RTS gamers, well, miss from older generations of games. In many newer RTS, game economies tend to be more black-box, more automated, and this strips some of the player’s ability to influence their game state, often without providing that essential complexity/demand back into the game elsewhere.

Let’s look at a few, quick examples. First and foremost, one of my favorite modern RTS is Grey Goo. While it may harken back mechanically in many respects to classic C&C games (in particular, Tiberian Sun), its economic model is highly streamlined, basically giving the player control of the location of the refinery and extractor, then automating the production and pathing of harvesters, making economics more of a matter of map control and awareness than anything.

Similarly, the economy in Company of Heroes 2 is driven almost entirely by map control, with points on the map generating Munitions and Fuel with no real input from the player, making economy almost entirely a matter of how effective the player is with their units as they vie for territorial control. 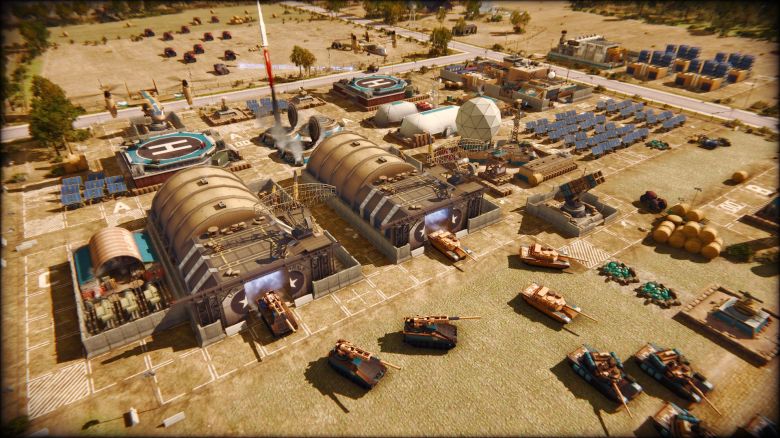 Act of Aggression has a little more focus on its game economy, with some very interesting (though often incredibly un-intuitive) economic decisions included in the game, including extreme economic restriction in the late game as map resources literally run out entirely. But again, Act of Aggression puts limits on a player’s control of their economic decisions. There are hard limits on how many workers can be used for extraction, limits on resource cap (which is an interesting but again highly restrictive design mechanic, at least as implemented in AOA), and, importantly, players cannot directly control workers.

Early Access RTS Servo recently added an economic unit that boost production from the game’s previously automated refineries, giving diminishing returns with each unit added (there’s an optimal number of such units but I cannot remember what it might be), allowing players to spend money in the short term to reap long-term economic benefits. This is incredibly refreshing in a genre that seems to want to put economics on the back seat (by and large)

All of these games give players little direct or nuanced control of their economic successes, focusing more on positioning, unit control, tech tree climbing and other factors. What is the downside of this?

The Importance of Economic Nuance 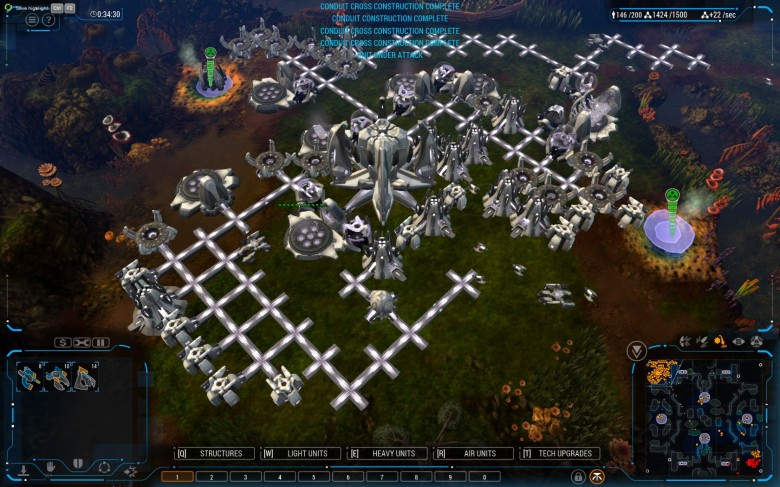 So, let’s tie what I said in the opening portion of this article into the observations in the second piece: these games all have limited the player’s ability to control the outcome of their game by means of economy.

In Grey Goo, the goal was to streamline the process of economic management to allow the player to concentrate on things like unit choice/army composition, unit management, base construction and other decisions that they deemed more interesting and more important, but in so doing they stripped out much of the nuance of the C&C economic model, which was famous for forcing hard decisions on the player as harvesters had to venture ever farther afield to bring resources back to base (as we saw in the Dune games and the core C&C universe games).

This automation, I think, contributed to many C&C veterans feeling let down by Grey Goo since they weren’t able to intelligently order around their harvesters to maximize risk vs reward in mining. This, effectively, gives the player fewer options for success when compared to the classic RTS. Economics comes mostly down to unit control: that is, who is able to better harass/limit enemy harvesting operations, and who can hold the most resource harvesting points. Everything else is left up to the game AI.

Likewise, when Company of Heroes 2 makes its economics almost entirely about territory control: it ties economic success directly to the player’s ability to control their units and the map. This leaves unit selection and control the primary tools the player has to influence their game state. Now, “unit control” in Company of Heroes 2 is a much more nuanced and deep system than in most other RTS, but when compared even with other entrants in the same series, we see that it doesn’t allow players to influence resource rate as we saw in the Dawn of War games

I could keep going but this is what I think it boils down to: when games de-emphasize their economies, they tend to intentionally or unintentionally make their gameplay more shallow. They remove or limit an essential aspect of player agency: that is, controlling the growth of one’s ability to interact and impact the game.

Economy/wealth is basically an indicator of the player’s ability to take action in the game, and making an economic system more shallow in an RTS without adding in new, nuanced systems for affecting the game state is to, essentially, remove player control mechanisms.

AirMech addresses the simplicity and lack of control of its economic system by adding a new requirement and several unique classes of unit: first and foremost, the player has to funnel everything through the bottleneck of their AirMech. Everything from upgrades to unit production ot army management is tied to the AirMech itself, making position on the battlefield literally a resource in its own right. This is combined with the battle changing nature of AirMech abilities: it’s possible to order armies to attack and not accompany them, but if that army is intercepted it’ll likely be toast unless there are late-game units present in substantial numbers. Now, AirMech’s resource system is certainly simplified: moreso than the other models I’ve criticized in this piece, but it manages to keep things moving and rewards players with a wealth of choices to keep gameplay dynamic.

Another game/series which at first glance might seem to limit player choice economically would be the Total Annihilation/Supreme Commander series. However, since in these games building proximity influences economic performance, and given the dizzying scale of these games, it’s actually the opposite. Supreme Commander may actually be the top game for economics being an avenue for player success. In fact, in this series, the problem tends to almost drift the other way, where unit control tends to take a far backseat to economic adjustment.

To me, the best RTS formulas give players a wide variety of economic and tactical options for success. Which bring us to the Command and Conquer model, and the StarCraft/WarCraft model.

I am not trying to say that RTS live and die on their economic systems. Heck, I prefer combat to economics. But you cannot, cannot, cannot strip out something as big and intricate as an economic system, not replace it with anything, and expect your RTS to keep player interest like similar games that still have them. RTS are about delicate balance of multiple factors. Too few things to balance and too few tools to succeed, the less the player feels challenged and in control of their fate. 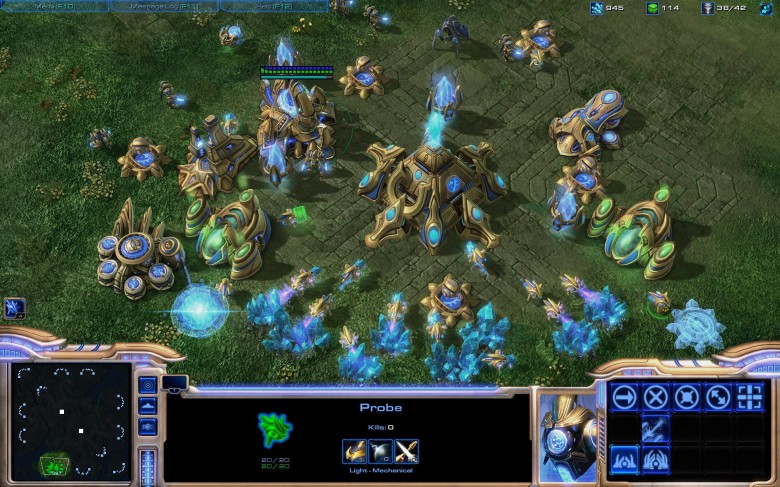 I kind of hate to put it this way, but in many ways the StarCraft and WarCraft RTS are kind of the boilerplate RTS. They include potential for economic victories through ‘booming’ or out-producing, for ‘micro’ victories with small numbers of carefully chosen units sowing discord (look at Banshee or Dark Templar here, in particular) for turtling and rushing, for a seemingly dizzying variety of ways for players to succeed.

In fact, so much control do these games place in the hands of the player that they are often criticized for being too much about execution speed. I think that most players “on the inside” of these games realize this is more of a factor the games’ high mechanical baseline than it is about pure execution speed being the determining factor in gameplay, and to me these complaints mostly stem from players’ feelings of inadequacy and frustration at being beaten by what seem to be inferior strategies executed by those with only superior mechanical control.

In the end, though, I think that what you see in a StarCraft or a WarCraft is that these games put you in charge of everything: every individual worker, every inch of distance they must walk and every building that must be built. Many factions, like Humans from WarCraft 3 or Terrans from StarCraft, even have the option to commit extra workers and resources to construction projects to complete them more quickly. A very powerful tool for control of the game state via economy, indeed! And not to be understated.

Look at the Age of Empires series, with its plethora of resources, each with a separate focus and one (stone) being more or less optional, if a player doesn’t want to focus on defensive structures. Workers and resource gathering methods (food) are incredibly important to game efficiency, and multifarious methods for using these economic units exist (as in the StarCraft/WarCraft section above, use of additional workers to speed up production cannot be discounted in importance. Opportunity cost drives interesting interactions in RTS!)

Whether or not it is articulated as such, the best and most beloved RTS franchises of all time focus primarily on giving players nuanced and meaningful agency both with army design, unit control and economic processes. When modern gamers complain about RTS not focusing on economy, this is the hidden root of their complaint. RTS have not stopped focusing on base-building, but have instead stripped out economic agency to streamline base management and have not designed additional agency back into their mechanics elsewhere.

The next big RTS might not look much like RTS of the past, but those looking to create games based on the glories of the RTS heyday may do well to take a keen eye to the economic models of the most beloved RTS franchises, and analyze what impacts these systems had on player enjoyment.