Looking at games (both real time strategy and otherwise) released in the past 4 years, and a couple of upcoming titles, we can see some trends that I think are going to become staples in real-time strategy games over the next decade or so. Let’s face it: as my colleague Chris Swain pointed out recently, RTS games (proportionally, at least) are failing to capture the mass market of gamers to the same extent as simpler genres, like shooters or MOBAs.

And no true RTS fan would accept a simpler game – virtually every modern RTS from StarCraft 2 to Company of Heroes 2 has large swaths of the player base already complaining about the dumbing down of the genre. And yet, hardcore RTS games have failed to take off while millions of people happily play Clash of Clans or the flavor of the month browser “RTS” or League of Legends, bespeaking a desire for “simplicity” in a certain segment of gamer. And yet, no RTS that has attempted to simplify the genre has taken off: many, in fact, have died ignominious deaths.

While I don’t have a solution or magic formula as to what might ‘revitalize’ what has almost become a niche genre, I do see some things in current and upcoming games that will, and probably should, become standard for AAA and B-list RTS games.

This article has been reposted from RTSGuru.com, which appears to have been recently decommissioned. I’ll be periodically reposting some of my best writing from that site, in the efforts to preserve it. Thanks for your patience if you’ve already read this! 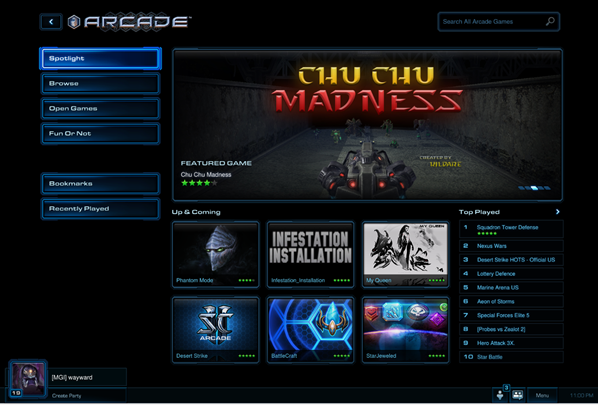 One of the most singular and I dare say important features for future RTS games is the “Arcade” or “Workshop” – to give it the name of either Blizzard’s Arcade from Battle.Net or Steam’s Workshop. Having one place to access player created maps, skins, custom scenarios, and more (with, in the case of the Workshop at least, the chance for players to monetize their creations and share the revenue with the game’s creator) is an invaluable step forward for both modding communities and game makers.

This is a win-win for all involved: a core component of any long term RTS player base are the player mods: look at Defense of the Ancients, Footman Frenzy, DoW2’s Elite Mod, the Eastern Front mod for Company of Heroes… the list is long here. RTSes that support mods and make it easy for players to access this content (literally, to shop for it) tend to be long-lived RTSes. Lately, many companies say that their game is intended to be a platform more than a standalone title… and I actually think that’s the right way to approach it. Give your players a playground in addition to the competitive multiplayer (which only roughly half of purchasers can be coerced into trying, according to conventional wisdom).

Bottom line, the games that utilize all-in-one launchers and custom map delivery services benefit from them, and have since at least 2004. I expect systems like this (especially Steam Workshop integration) to become standard for mainline RTS games as they seek to broaden their audiences and become stickier to players. And some of these things are long overdue for widespread adoption. 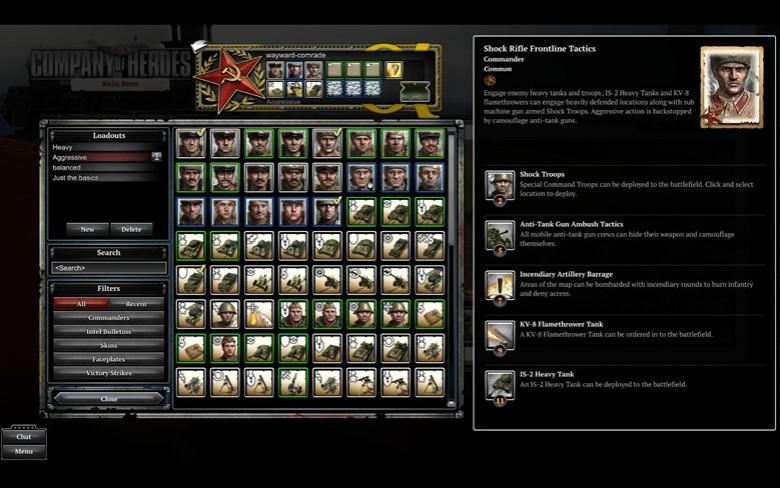 Company of Heroes 2, StarCraft 2, Grey Goo, and Planetary Annihilation all have various systems that, if they have indeed been present in RTS games before, are at least becoming more mature and starting to show clear signs of being worthwhile. While some players may balk at some these systems, I believe firmly that their adoption is part and parcel of the evolution of the real time strategy genre, and are necessary for it to remain competitive with games of other genres.

One of the more contentious of my beliefs is that it is a good thing for real-time strategy games to include systems similar to what you see in Company of Heroes 2, in particular, including skins, or cosmetic customizations, and here’s the contentious bit: loadouts, or out-of-match faction customization. Perhaps the way Company of Heroes 2 implements these particular things isn’t up to snuff yet, but I think that once games find more mature ways of implementing these features, it will be a good thing for the genre as a whole, for all that RTS old guard will continue to kvetch about them.

Face it, RTS gamers. People like to customize their belongings, to make choices about how their property looks and feels and behaves. You see it in their browsers, and more importantly, in their shooters, their MMOGs and their arena-based combat games. Like achievements, customizations (both cosmetic and otherwise) are coming. We’ve already seen StarCraft 2 implement a limited skins system, and Planetary Annihilation sell alternate commander models. We see Company of Heroes 2 sell skins, as well, and up the ante slightly with a Commander system that vaguely resembles hero purchase models from MOBA titles like League of Legends. People also like to earn things, too, as it turns out.

Cosmetic alterations like skins, badges, or Planetary Annihilation’s Commander models are an easy sell. There are, of course, challenges with customizations that can experientially alter a player’s multiplayer experience. Balancing factions against one another, factoring in whatever unique features the game chooses to introduce through a loadout system. In Company of Heroes 2, the game provides variations within its existing combat model – different infantry options, heavier or faster (seldom both) tanks, or heavier tank destroyers, unique upgrades to base units, access to heavy “off-map” strikes etc. These are built into predetermined groups of 5 each, called “commanders” – some are obviously better than others, and some were purchasable only until the Western Fronts expansion, with the implementation of a system that has a chance to randomly drop items from a predetermine selection, including commanders, skins and more. This is in some ways similar to how Dota 2 occasionally gifts players with Workshop items, though Company of Heroes 2’s model is still immature.

Randomly dropping, or giving players an option to earn custom content via a currency system, are 2 possible options for the loadout system. They’re not the only options – how you implement such a system is important, but secondary to the importance of giving players options, and being able to add to or grow a game over time. And that’s precisely what this class of options is about – growing a game over time. For so many, too many RTSes, players lose interest. Balance can kill a community, but so can stagnation, and the traditional expansion model is in my opinion insufficient to add enough content to keep players, well, playing. Player (or developer) driven cosmetic modifications and modding are 2 ways to achieve this influx of new… stuff to a game, but so, undisputedly, is a system which experientially expands the “core” multiplayer game. We’re still a ways off from finding the golden ratio of modification to systems balance, but Company of Heroes 2 and failed projects like the new Command and Conquer game and End of Nations are bringing us closer to figuring it out. 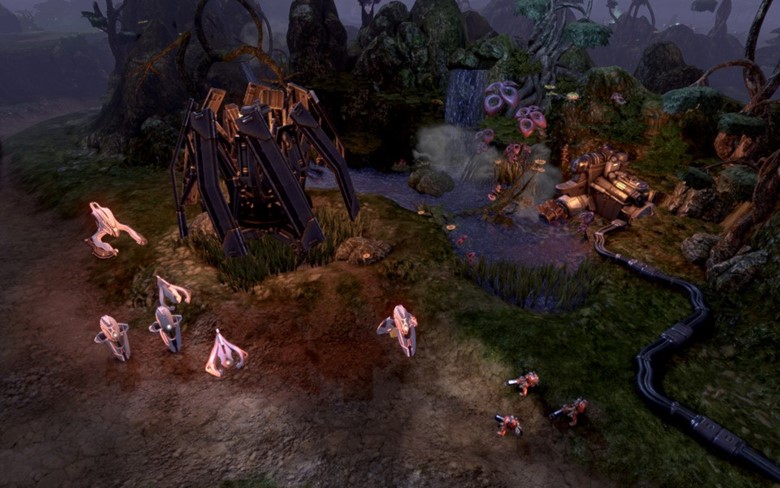 One of the most core experiences in the RTS game, perhaps the most core experience, is the way users interact with it, physically, with their keyboard and mouse. While MMO games are heralded as complex, the reality is that most RTS games have as many or more possible commands that need to be issued (in most cases at high speeds, in excess of 60-90 actions per minute). Games have toyed with a number of systems, from letter similarities (stop command = ‘s’ on the keyboard) to grid systems, where position on the keyboard is related to position in the commands pane. But Grey Goo has a system so elegant, it will almost inevitably be copied shortly after the game’s launch.

Borrowing from MOBA games, Grey Goo’s keyboard interface relies on cascading options bound to the QWERT keys on the keyboard. This enables the player, once the they learn the system, to very quickly and with very little finger travel time, to navigate through complex menus to choose commands, abilities, research, or structures for construction, as the menu is global and contextual. The true beauty of the system is its accessibility, which is sure to be a boon to lower skilled and newer players trying to break into the genre. It’s… streamlining, without simplification.

One other system I’d love to talk about is the persistent multiplayer battle. This has been corrupted or implemented incredibly ham-handedly by supposed “MMORTS” browser titles, but the seeds of success are there. From Shattered Galaxy to Shogun 2 to the now- deceased Age of Empires Online, RTSes have chased this trail with more or less success. This topic, like many of the others I’ve touched on, deserves its own 1600 word treatment (or more). Like ‘loadouts’ or streamlining a game’s interaction model, the experimentation into this sort of feature is in its infancy, but giving players a bigger goal than “get x achievement” or “earn the next skin” or “win x battles” – giving them something real to earn and fight over… now that will draw in and keep players coming back. Giving context and meaning to an otherwise meaningless string of conflicts. The game that perfects this will have its fair share of imitators, and for good reason.

Ultimately, no real-time strategy game can even be considered for mainline support without a solid mechanical base. Shoddily conceived RTSes are doomed from the beginning, regardless of any modifications to user experience which can be heaped upon them. This is not a treatise recommending tacking monetization features into mediocre games. Sure, that’ll happen on the road to success, but what we need in the genre are games that capture players of all skill levels, and evolve with the player base. Games that stagnate, like so many RTSes are doomed to do by their very mechanical model, will lose their player bases and cause the community of a game to collapse in upon itself. Giving players a sandbox, letting them trick out their possessions, letting them feel in control of their destiny and giving them a cause to fight for are things that keep players coming back for more. Add that to solid gameplay and good aesthetics, and a good game will go far.