It’s been quite a while since I’ve metaphorically penned any words here, and I hope to be able to expand the content I produce under the Wayward Strategist brand in 2016. This post will, also, not be about strategy games, but instead about a first-person shooter: Titanfall. Timely, right?

Yesterday afternoon, I saw and commented on a tweet from the EAAccess twitter account recommending Titanfall to anyone who might have purchased or received as a gift an Xbox One over the holidays. I called the game one of my favorite shooters. This was met with incredulity from several of my followers, gentlemen who, assuredly, know and care more deeply about the FPS genre than I do. I thought that, instead of chaining together a string of tweets, I would take the opportunity to write a short post about the game and share my thoughts with, perhaps, a slightly broader audience.

Let’s get this out of the way first: my enjoyment of Titanfall is pretty low-stakes. I never played it seriously. I play RTS seriously. I love getting elbows-deep in RTS mechanics and systems and figuring out what makes them tick. For FPS, I play them, mostly, to run around and shoot things. It’s a lower-commitment form of entertainment.

That being said, one of the primary aspects of this game that got me hooked and kept me interested was the dual nature of the player character. As a pilot, the player experiences a freedom of movement not often seen, at least in a competitive game, and at least not until other FPS decided to implement versions of the mechanic. Wall running, combo-jumping, hanging off of walls and ceilings always felt just right to me in the context of the sprawling levels, and made combat, while often over frustratingly quickly, always tense and obviously a matter of how tightly each player was controlling their character.

Not being able to maneuver cleanly through the environment was a death sentence, and many levels provided players who mastered the game’s maneuvering skills with advantageous terrain for sharpshooting, ambushes, and/or quicker traversal.

Once Titans become available, the game takes on a completely different character, and the cat-and-mouse (or, cat and Africanized honeybee) interplay between pilot and pilot-driven Titan is one of my favorite asymmetrical relationships in FPS. Titans play completely differently from pilots, actually able to take a hit, responding to terrain completely differently, and able to punch, crush and otherwise mutilate unwary Pilots who venture too close. 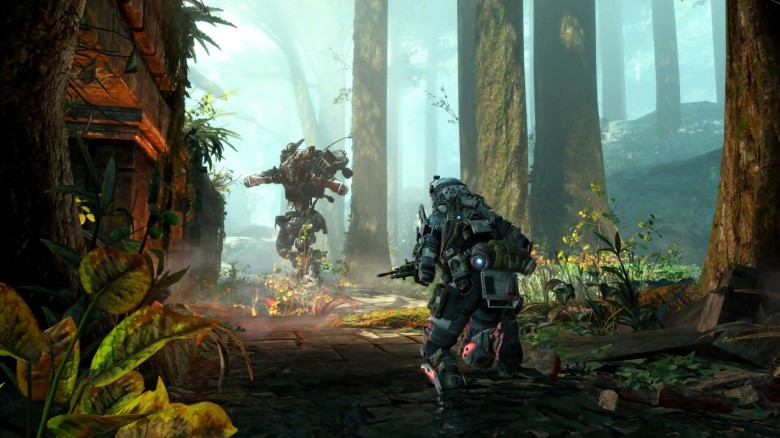 And of course, the Pilot is encouraged to get close, as they can mount and quick-kill Titans from behind, or use their specialized Titan-killer weapons to whittle them down from afar. Some of my favorite moments in Titanfall remain two players battling over the Titan of one player. The pilot attacking the Titan dancing from the enemy Titan’s back to nearby vantage points, the pilot driving the Titan jumping in and out to try and protect their investment and/or utilizing the Titan’s built-in defenses… I’m not explaining it well. But intra-Titan fighting, and pilot-vs-Titan dynamics, really helped keep my interest in this game and its formula strong. Even using friendly Titans as a mobile perch is interesting (though I never found it as useful as I’d hoped… you were too susceptible to splash damage on a friendly Titan’s back).

My favorite modes in Titanfall were always the standard points mode, and the territory capture mode (pardon the absence of proper names here I’m doing this quite off the cuff). Points mode allowed mediocre FPS players like myself to meaningfully contribute to their teams’ success even if their twitch reflexes weren’t up to par with their opponents. Killing Titans was a different skill set from killing players, and there were minion-like soldiers running around waiting to be turned into points for your team, allowing newer, less experienced or straight up worse players to actually help out the killing machines on their team.

I very much enjoyed Titan fights, or generally fighting as a Titan, and would like to flatter myself by saying that I was slightly above average at killing Titans in most circumstances (Last Titan Standing was another favorite game mode of mine). But most of the points I’d contribute to a team would be Titan kills, followed by pilot kills, followed by faceless minion kills. For some reason, I never paid enough attention to the faceless minions to contribute significant points through taking them out. But I was always most disappointed in myself if I wasn’t in the top 2 or 3 players in the game in terms of Titan takeouts, whether my team won or lost.

Which, by the way, is one of the beauties of the FPS model, to me. Players can still be satisfied with their performance even if their team lost. This is one reason I advocate alternate win conditions in RTS games (like points capture in Company of Heroes or Wonders in the Age of Empires games) – divorcing win conditions strictly from military performance allows players to be satisfied with their military performance even if their team lost in the meta-arena of game objectives. Or vice-versa.

I’m not a big FPS theorist and I don’t play many of them, so I’ll keep this short. The pilot weapons list is adequate. Most of the guns feel fairly different, and have limited customization options that can tailor them slightly to suit the player. Honestly, I’m all in favor of more substantive mods… in Titanfall my weapon modifications were mostly (pardon the pun) fire and forget. I’d set them up once and seldom go back to review or fiddle with the loadouts. The tactical/grenade options were similarly unimpressive (to me) in their lack of variety. I’d expect Titanfall 2 to feature more of these, as well as hopefully more Titan types or ways to customize the Titan itself.

3 Titans is a decent number: big and slow, generalist, weak and fast. Makes sense to me. I’d have loved more options to kit out the Titan, more mods or other customization options would’ve interested me, or at least 1 or 2 additional types of Titan would’ve spiced things up more.

This was seriously lacking. A real campaign likely would have been out of place, but what was included was completely uninteresting. I hope Titanfall 2 does better in this respect.

All in all, Titanfall interested me primarily due the interplay between Titans and pilots, how being in a Titan changed how the player thought about the map’s terrain, and the ability to contribute to a match through skills other than run-and-gun twitch killing prowess. Loadouts/tactical skills were interesting, but the options too limited in my humble opinion. A very interesting formula that I think a second version would only improve.