My co-writer Topher Doll was gracious enough to pen some lines last week, enabling me to get a year-end retrospective out just before we jumped to 2016. Now that we’re firmly past all of the holiday festivities, I’d like to take the time to talk about a couple of things we saw happen last year in the RTS space, and talk about what we can look forward to seeing this year.

We saw a fair number of RTS come to market this year. Let’s take a look. 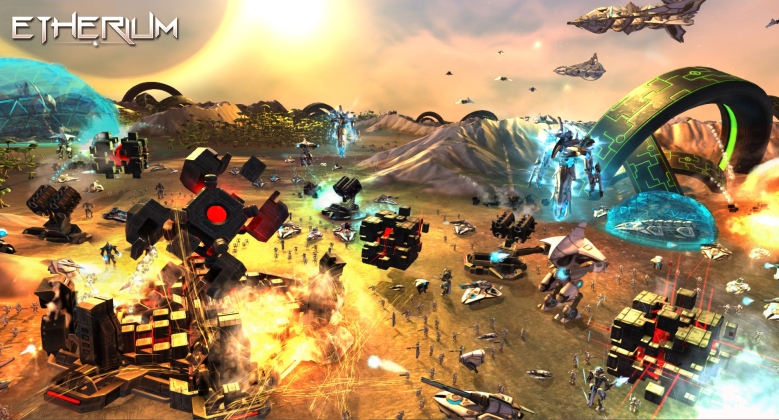 This would have to be my contender for most disappointing RTS of the year, sadly. This game has some extremely clever mechanics: each tileset has a unique weather feature that changes play periodically, many maps feature neutral AI subfactions that can be controlled or killed by either player, and there is the option for a non-army-driven ‘fleet victory’ where players can build structures that drive up a victory counter. The unit lists, however, were too same-y, with each faction only having 2 unique units and a handful of unique upgrades that made gameplay a little stale. Sadly as well the game was underwhelming graphically, which can be hard to overlook for some, and its UI and UX were terribly unpolished which led to a low quality experience for players used to things like production queues. Etherium is a fun game full of great ideas that were hampered by execution. Still, the single player is fun. 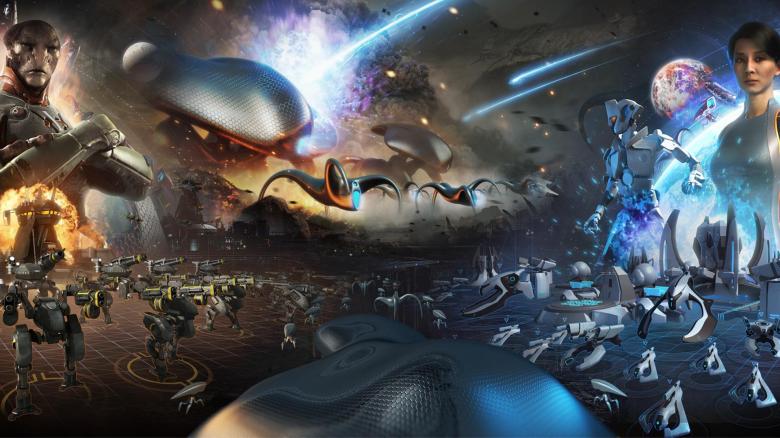 One of my personal favorite games to launch this year, Grey Goo is a throwback to classic C&C gameplay… sort of (series: 1, 2). After a rocky launch, Petroglyph and the team developing the game did a series of updates, improving the game’s AI, adding replays, leagues, expanding custom map support, and observer mode, as well as running a decent tournament which should conclude in January. I still have high hopes that a Grey Goo expansion or sequel will continue to expand on the game’s ideas and maybe increase the game’s pace and depth, while keeping or improving the QWERTY interface, research system, and unique faction dynamics I’ve so much come to appreciate over the course of the year. 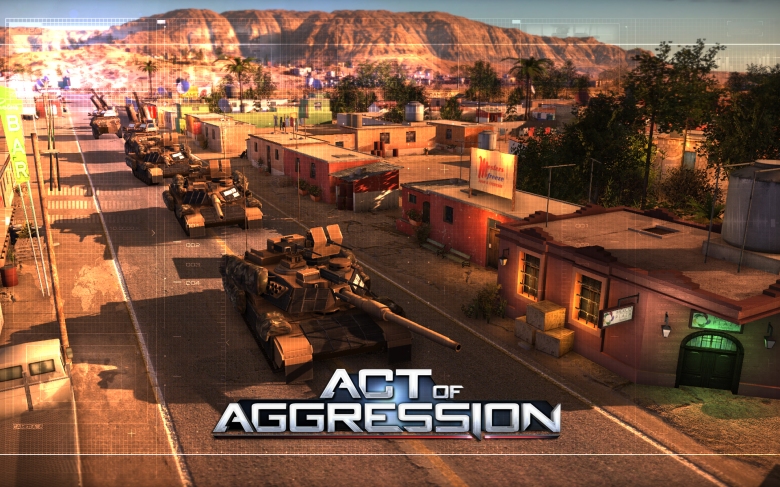 Act of Aggression is in a very strange place for me. It’s a gorgeous game with some interesting mechanics and systems that, for some reason, makes me feel like it doesn’t want me to enjoy it. Like, Eugen hid a well crafted game behind arbitrary and confusing tech trees, structure requirements, and user interface designed to keep players out. It doesn’t surprise me that the game has a small and dedicated following, and sadly it doesn’t surprise me that it turned off many who tried it. I have hopes that an expansion to this game, or patching, can alleviate the awkwardness that players detect when exploring AoA and bring it a community its depth and design could rightfully deserve.

Company of Heroes 2: The British Forces

The hits just keep coming for Relic. 2014’s Ardennes Assault campaign was not just one of my favorite RTS campaigns of the modern era, but one of my hands-down favorite I’ve ever played, and throwing the British into the mix (as well as adding new Commanders for US Forces and Oberkommando West) has reinvigorated my interest in the latest Company of Heroes title, which is a candidate for my own personal list of best RTS of all time. 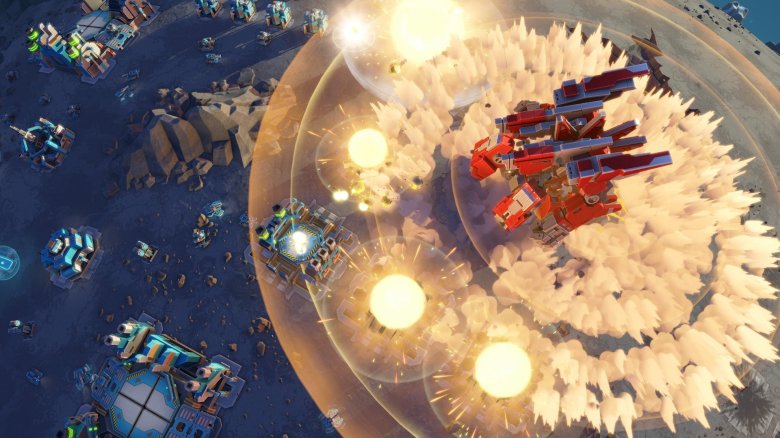 I’ll admit, I haven’t given the next couple of games on this list as much time as they’re due. While I do own PA:Titans, beyond fiddling around with the game a bit to see the new toys, I really haven’t gotten elbows-deep in the mechanics to see how the new Titans impact gameplay. I would encourage those who see the release of this game as an affront to read Mr. John Comes’ Journey of a Kickstarter to get a different perspective. PA still does boast a decent community with several hundred players logged in concurrently, and for those craving RTS on a massive scale remains the best modern option going into the new year. I’ll try to do a couple of videos or another article. Last year, you may remember, I very much enjoyed my return to the game after an extended hiatus.

Age of Empires 2: The African Kingdoms 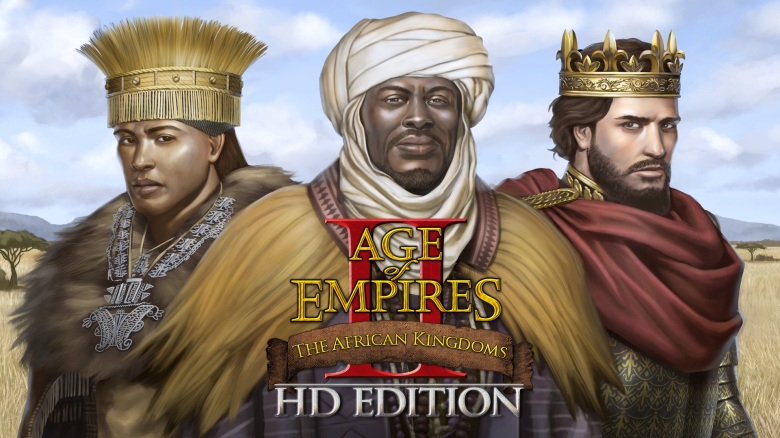 Ok, first of all: Age of Empires 2 is in all likelihood the second-most played RTS right now, after StarCraft LOTV, which is a testament to the lasting value of the Age of Empires franchise (Mr. Topher Doll offers a different perspective on this in an article on my site here). This should also serve as a notice to RTS developers that timeless formulas are still popular, and that there still is a market for RTS games. RTS gamers are almost, but not quite, impossible to please, as it turns out.

I look forward to playing more of this game this year.

Legacy of the Void 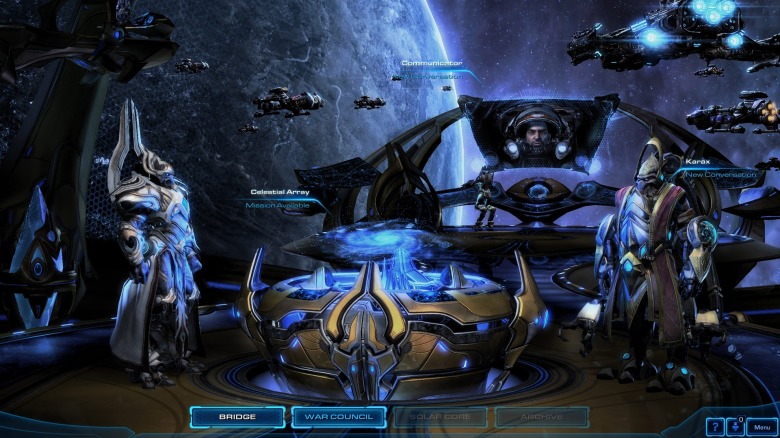 The bad mamma-jamma of the RTS world finally gives StarCraft players what they wanted (sort of) with the final official expansion of StarCraft 2, providing us with some of the best unit design and worst storylines that money can buy. StarCraft 2 remains and improves its position as the most polished, feature-rich RTS of all time, leaving fans of other games jealous of Blizzard’s enormous budget and team which provides players with: new game modes like the co-op mode, stand-alone campaigns (coming in 2016 with a Nova story DLC), Archon Mode where 2 players can control a single army, automated tournaments, and a slew of quality-of-life upgrades, new unit skins and more.

Love it or hate it, but StarCraft 2 just keeps giving people reasons to stick around, and the RTS genre needs that. Good on you, Blizzard! 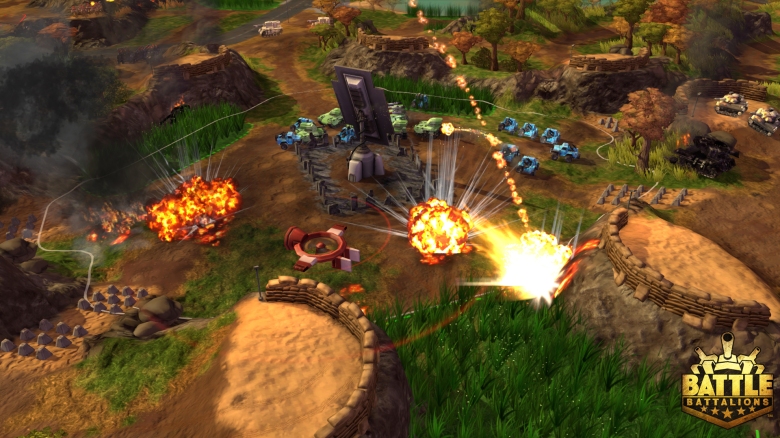 Released later in the year, Battle Battalions is a frenetic tactics game where players take squads of tanks, jeeps or infantry into fierce battles of territory control. One of this game’s most unique features is that units lost in battle are lost for good (until the next match, that is) meaning that poor unit control and teamwork are punished, hard. Sadly, as I think it’s a rockin’ good time, Battle Battalions community has remained pretty small. I’m hoping Petroglyph can bring this one roaring back to life as a result of the changes they outlined in their development roadmap.

In addition to the games above, we had a bevy of RTS go into Early Access on Steam, to better or worse effect. 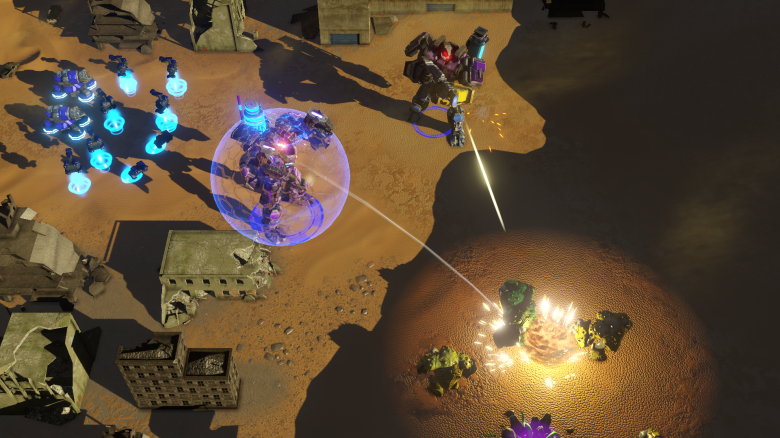 When Servo was first announced, I was so excited about it that I pre-ordered the Founder’s Edition to get a chance to see it like, 2 weeks before it went public. And I like a lot of its ideas: in particular, having several player-designed hero units supported by armies of balanced, pre-designed units seemed like a winning idea. But, despite a lot of good work by BonusXP, a player base never seemed to materialize for Servo (sadly). Hopefully in the new year we’ll see a new wave of enthusiasm for the game both from BonusXP, Stardock and players as we all work together to make this the best game it can be. On my wishlist are: more unit types, or perhaps Servo modules that provide access to unique unit types, a UI overhaul, more single player and co-op content, and more Pilots. I’ve been interested in, and worried about the future of, this title for a while now. Fingers crossed to see big things in 2016. 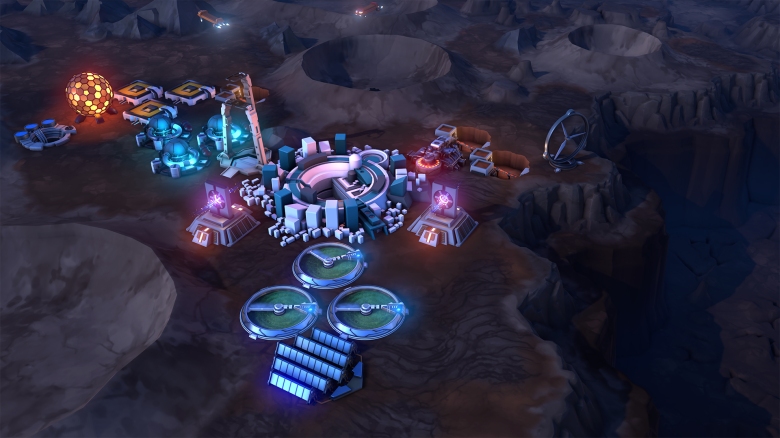 After Offworld Trading Company’s explosive (at least, it seemed that way to me) launch into Early Access, it kind of, quietly, began improving itself over time. I really want to enjoy this game and come back to it every couple of months to play around with the added content. Perhaps I’m a veritable neanderthal too excited by explosions to appreciate the subtle strategy of this game, but it has thus far failed to capture my imagination or give me that “just one more game” feeling. I’m hoping that this year, talented designer Soren Johnson and the fine folks at Mohawk will close in on the magic “wow factor” that will make Offworld Trading Company feel like home to me.

Ashes of the Singularity 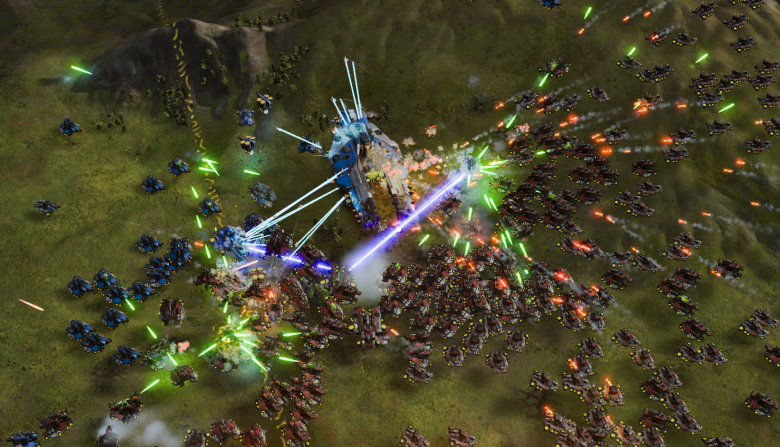 Ashes of the Singularity is in a strange place, to me. It has a tremendous amount of promise, but is both too hard on my mediocre gaming PC and too early in its life-cycle to determine how well it’ll live up to that promise. I’ll be watching this one VERY closely as it progresses in 2016. I’m hoping for big things here, in more ways than one. 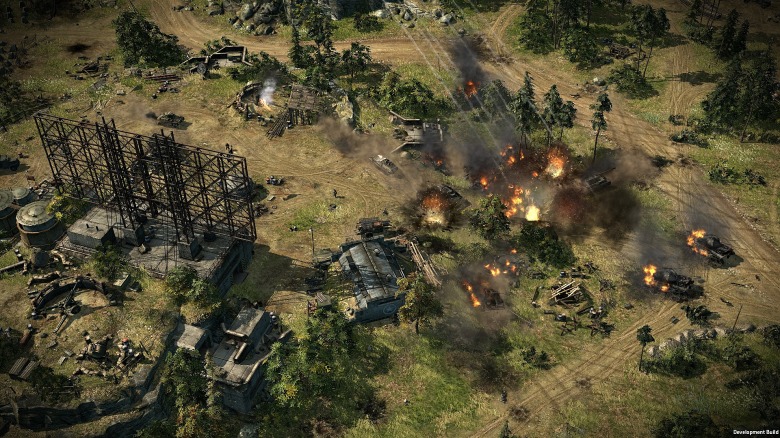 I’ve been intensely interested in playing Blitzkrieg 3, but have yet to muster up the courage to actually plunk down the money on it. Its initial multiplayer mode was a ‘clash of clans’ style asynchronous fight, with players attacking automated defenses set up by other players. With the announcement of plans for traditional live multiplayer (I’m unsure if they’ve implemented this yet) my interest in this game has reawakened, and the addition of a ‘bonus’ async mode actually seems like a good thing. I hope that this game goes far in 2016. I loved the first 2 Blitzkrieg games and have been hankering for a good WW2 tactics game. 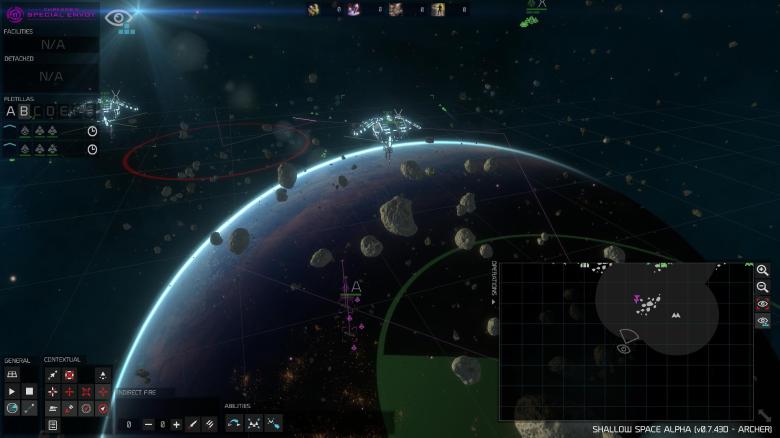 This is another one that I was unfortunately unable to purchase or play this year, but very much hope to be able to try in 2016. Shallow Space is one of the most ambitious space RTS I’ve seen in a long time, paying homage to Nexus the Jupiter Incident and Homeworld while trying to address issues with those formulas. While its own attempts to make strides in the genre have hampered understanding of what, exactly, it’s trying to do, Shallow Space is a passion project and looks gorgeous. I’m eager to get my hands on this game this year and see it in action for myself.

The “return” of the classic RTS, and the “rise” of the RT-eqsue?

This year, we saw a resurgence of RTS claiming to be desirous of returning to the “golden era of RTS” to… mostly no effect. Neither Grey Goo nor Act of Aggression, “classic style” base-building RTS, have made much of a splash yet, though there is perhaps slim hope for them in 2016 if they play their cards right. Interestingly enough, of course, we have seen Age of Empires 2 HD build steam with its second expansion. The staying power of this game is endlessly fascinating to me. Microsoft is actually capitalizing on this by releasing an expansion for Age of Mythology as well, which should be hitting virtual shelves on the 23rd of January.

As the draw of classic-style RTS has proved to be insufficient (or perhaps the developers don’t know exactly what enamored players in these games in the first place), we’ve also seen a spate of post-RTS titles go into production and falter as well. Titles like Servo and Battle Battalions have been accused of trying to ‘dumb down’ the genre or copy the success of the MOBA (unfairly, in my opinion) and have failed to draw mass approval from gamers.

Personally, I think that the next successful RTS formula has not yet hit the market. StarCraft is cornering the ‘skill junkie’ end of the RTS pool and will for a long time to come, but I think there is a large and unsatisfied group of gamers out there who don’t quite know what they want, but will love it when they see it. As to what, specifically, that might be? That’s harder to parse. But the continued successes of both Age of Empires 2 HD and Company of Heroes shows us that there’s more than one type of RTS that will appeal to players. 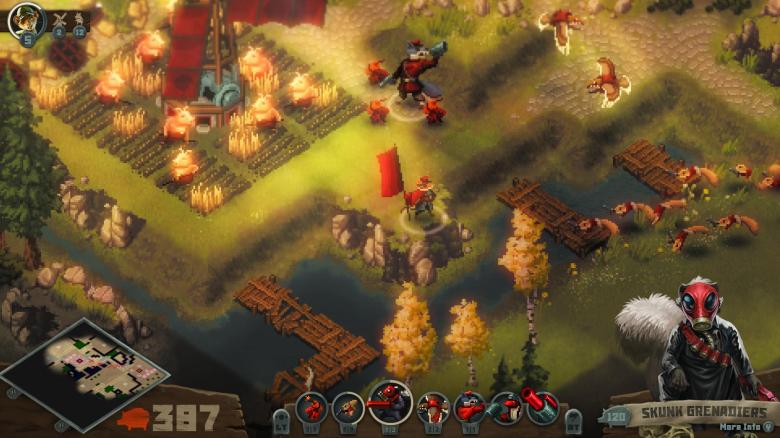 There’s… well, there’s a lot coming this year, either to Early Access or launching. Take a look:

I’ll try to cover these in more depth shortly.

Thanks for your time,