I’ve been hard at work on my first StarCraft 2 mod, Remnants, lately, and I’m excited to share what I’ve currently got implemented. Also, I’m putting to paper my road to actually getting this little game into peoples’ hands. Some units have changed slightly since the last time I wrote about the Constructor’s Tier 1 tech level, but much of this might be familiar to anyone who’s read my modder’s diary before.

The Constructor is a mobile production and processing robot, and if you’ve been following the progress of my mod, you’re likely familiar with it by this point. It’s largely complete, though as new structures, units and upgrades are added, its functionality increases and its role evolves. I did update the model to the Umojan Lab Warbot, which followers of my project have said “reads” better than the Immortal did. 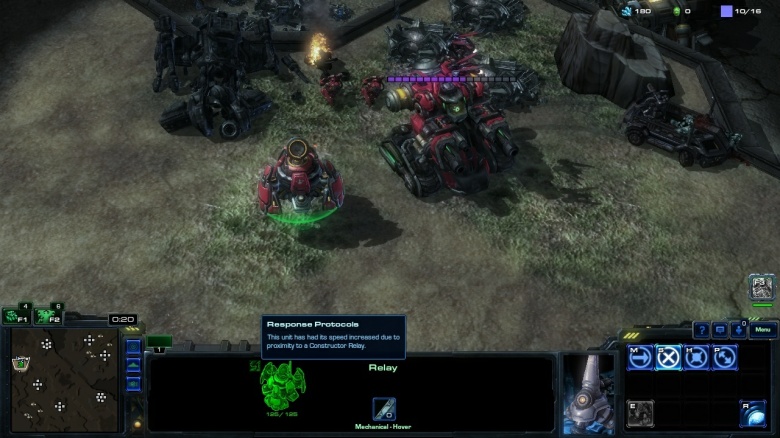 As I found myself nearing the reality of implementing the Dendrites faction, I started to think about the relative mechanical demands I would be placing on players of each faction, and determined that players would most likely end up needing to perform fewer actions to be successful with the Constructors than with the Dendrites. In an effort to move towards rough parity in execution demand, I implemented the Relay. Relays are like ground-based Overlords, providing supply for Constructors forces as well as functioning as ersatz scouts.

In keeping with my core design, however, the Relay does have a tactical function as well, and can assist with speeding up resource gathering. The Relay has 2 auras. Its default aura is Response Protocol, which speeds up nearby units. Relays can toggle on Defensive Protocol, which reduces incoming damage for the Relay and nearby allies by 15%. Units can be affected by both auras, meaning that a minimum of 2 Relays can be usefully included in a Constructor offensive force. Response Protocol can also speed up resource harvesting by allowing Scrapper units to get to and from Scrap deposits a little quicker.

Relays are produced singly by Constructors, and are always available for construction, though they do require the Constructor to expend Energy to produce.

The Recycler is a utility unit for the Constructors faction. During the earliest stages of play testing, I realized that I had no incentive whatsoever to split my force up into smaller armies: a giant blob was the safest bet for moving around the map, and Scrappers off on their own were highly inefficient due to the long slog they’d have to return Scrap to the Constructor cross-map. The Recycler is my solution to this.

Recyclers are mobile resource drop-off points, and slow but sturdy. They’re upgraded from individual Relays, meaning training a Recycler is an opportunity cost in terms of population cap in the early game. The Relay’s Recycler upgrade is unlocked from the Repair Station structure (detailed below), making this otherwise luxury building something that players may well want to consider building early to secure Scrap more quickly.

Recyclers can convert any owned unit or structure back into Scrap at 100% cost efficiency. They allow the Constructor player to re-purpose their army by selling back extant units and building new ones, and sell back captured or unwanted structures. Their salvage ability does take 30 seconds to execute, however, which is plenty of time to pick them off if an opponent doesn’t want one of their captured buildings sold off. 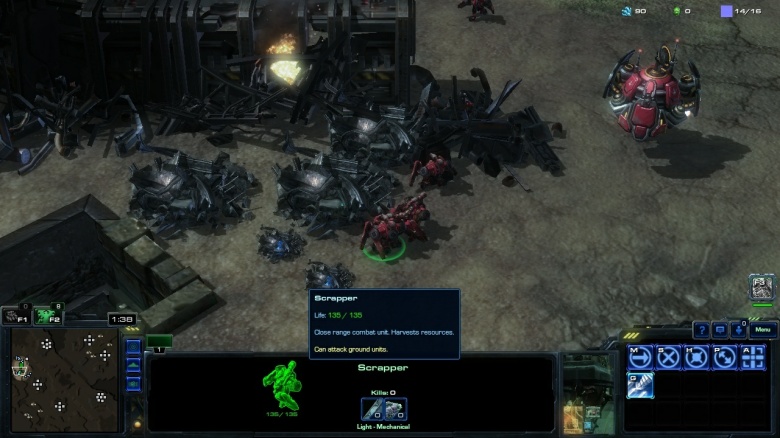 The Scrapper is the mainstay of the Constructors forces: sturdy, cheap and effective. They have decent HP and damage for their cost, and are relatively easy to produce en masse. However, the Scrapper is also the primary harvester for the Constructors forces. As players use Scrappers in combat, any losses will limit the Constructor player’s ability to harvest resources in the future. Scrapper use needs to be a delicate balance between utilizing their excellent DPS, and preserving them to fight, or harvest, another day.

Scrappers haven’t changed much since their early incarnations, though I’ve been tinkering with their stats for some time now and am largely happy with them pending testing with other players. They’re incredibly enticing to build, and most other Constructors T1 units support a strong core of Scrappers as a front line. Balancing their production with that of the Ram and Junkslinger will I think be an interesting prospect for players.

Scrappers can always be produced by the Constructor and are the only unit that costs no energy to produce. They are purchased in batches of 2.

The lookout is the primary scout for Constructors forces, though they do come with a devilish twist. Lookouts are, basically, Observers: flying detectors with a fairly long sight range. Lookouts, however, are not stealthed and are therefor somewhat more vulnerable than Observers.

The Lookout used to use the Protoss Observer model, but I’m now using the Raven, scaled down substantially. Since the Constructors mostly use Terran or Terran-derived models, they definitely feel more thematically appropriate now, in my opinion.

The most interesting change to the Lookout has been the implementation of their Energy Interference effect, which disallows Energy use entirely in a radius while the Lookout is stationary. Testing has determined that this actually renders units whose weapons cost Energy to fire completely unable to attack. My initial plan was to make this treat units with Energy-based “ammo” to be treated as though they were out of ammo, incurring their low-Energy penalty, but I see some real tactical possibility with this implementation. My hope is that players may be incentivised to build fleets of Lookouts to hamper enemy forces, in addition to using them as, well, lookouts.

Lookouts are purchased in groups of 2 and are always able to be produced by the Constructor, though they do require Energy to build.

The Junkslinger is a back-line fighter for the Constructors. It does decent damage at a better than average fire rate, but is fragile and its attacks consume Energy. Once a Junkslinger is out of Energy, its range and refire rate are reduced, making it riskier to use. Junkslingers also are able to fire a mass of super heated Scrap at enemy forces, spending roughly half of their Energy and some Scrap to deal area damage (as a skillshot) to enemy units.

The Sling Scrap ability is based off of the Ravager’s Corrosive Bile ability, though I did slightly increase the attack area, and am considering reducing the delay before impact, and the art assets used in the attack animation.

Junkslingers are unlocked by the Pattern Archive structure, and are produced in groups of 3. They are currently the highest demand units in the Constructors arsenal, as they have an ammunition based weapon and a skill shot ability.

The Ram is a utility unit and damage soak for the Constructors. Its attacks slow down enemy units in an area, like the Marauder, and it has the best HP/cost ratio of any Tier 1 unit in the mod. The Ram’s slow effect wears off before it can re-fire, making maintaining the slow require multiple Rams. Proper management of groups of Rams includes picking various targets with each Ram, to spread out the slow effect across an army. Ram attacks are Electric based, meaning they do absolutely no damage to units with Electric type armor, though their slow still applies. Rams make it easier to hit units with area damage skillshots like the Junkslinger’s Sling Junk ability.

The Ram is unlocked by the Pattern Archive structure, and they are produced 1 at a time. They are vital for soaking damage for higher-value units like Junkslingers and Scrappers. 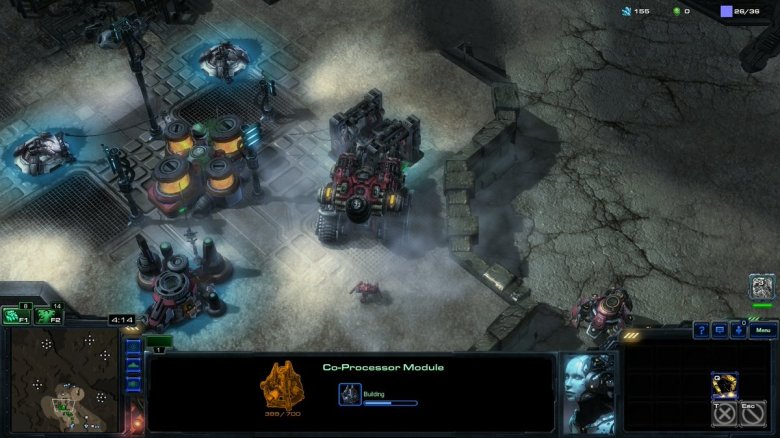 Structures in Remnants currently serve to unlock functionality: new unit types, new research options, et cetera. I’m planning on spicing this up a bit, but haven’t implemented many of the more interesting features of structures as of yet.

Currently, all structures are planned provide a passive bonus to the controlling player, giving players some incentive to not immediately sell off structures when they capture an enemy base of a different faction. Passive bonuses are the primary source of “upgrades” for general faction units, as most research-based upgrades are geared towards key units such as the Constructor.

All structures in the Constructor’s Tier 1 require only an active Generator to build. Tier 1 is “flat” and any of these structures can be built in any order. The order in which structures are built is intended to have a meaningful impact on the approach the player has to the game. For instance, a Pattern Archive and Co-Processor Module result in a very different approach to a match than a Repair Station and a Survival Module. As the game progresses, these decisions should even out more, but the early game should be impacted dramatically by a player’s choice of initial structures, setting the stage for the big choices they’ll have to make going into Tier 2 (which I will discuss another time).

Generators are vulnerable structures, and critically important to protect. They’re relatively easy to destroy, making it tempting for opposing players to pick them off to temporarily set a Constructor player back. 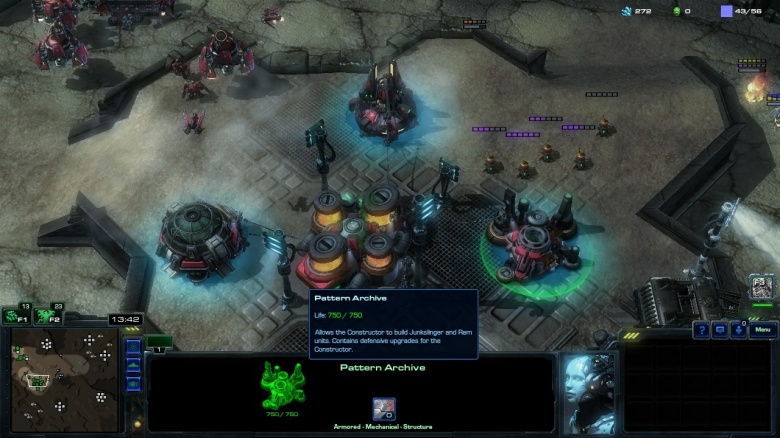 The Pattern Archive unlocks both the Ram and the Junkslinger. It uses the Terran Armory model. Though these have not been implemented yet, the Pattern Archive will also confer a +1 sight range to all units for the owning player, and contains 3 mutually exclusive upgrade options for the Constructor: a permanent boost to health, damage, or movement speed. The choice of one of these invalidates a choice of the other two.

Like most other structures, the Pattern Archive can only be built on a Power Node. 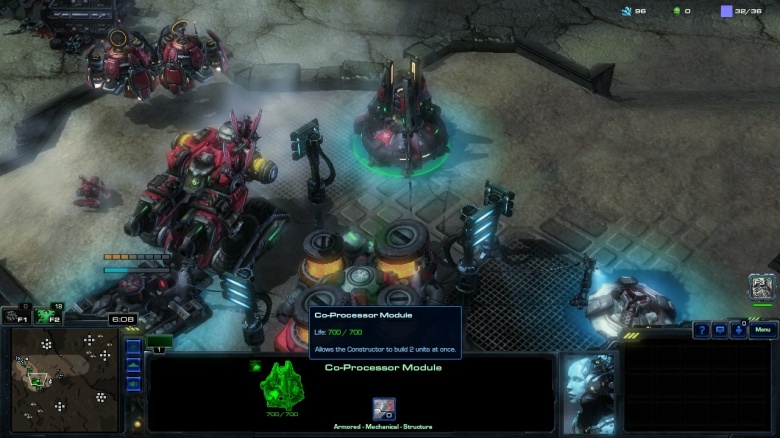 The Co-Processor Module allows the Constructor to issue 2 unit production commands at once. Originally, this structure was intended to be able to produce units itself, but I think that making the Constructor able to build units more quickly is thematically more appropriate to the faction, and also more interesting.

I’m considering allowing each Co-Processor module to add another build queue to the Constructor. I’m also planning on implementing a 10% training time reduction for all units built by the controlling player.

Still to be Implemented for Constructors Tier 1

Players who want to be more defensive would choose this structure earlier on.

The Survival Module has a turret, and enables the construction of the Repeater Circuit, which unlocks Tier 2 structures and upgrades.

The Road to Tier 2

I’ve been focused thus far on implementing the Tier 1 for the Constructors faction. After I finish with that, hopefully as soon as the week this article is published, I’ll be completely redoing the Remnants game map. The current map has sufficed for my initial testing, but issues have arisen as development has continued, and I feel like I can’t really go farther until the map actually works for the game.

After the map has been redone, I’ll be building out the Dendrites Tier 1 units and structures. Some of these may prove to be fairly complex, as they have been re-designed from earlier plans to account for the relatively straightforward nature of Constructors unit design. Their harvester, in particular, may be one of the more complex units in the game from an implementation perspective.

Once the Dendrites Tier 1 units, structures, and upgrades are implemented I’ll be publishing the mod to Battle.net for initial player testing. Unfortunately, the meat of the mod is Tier 2, which I haven’t really talked about yet.

Some concepts introduced in Tier 1, like the Junkslinger’s ammo system or the mutually exclusive upgrades found in the Engineering and Survival modules are greatly expanded in Tier 2, where more units require ammo/Energy management, and more advanced harassment and Energy manipulation options are unlocked.

Thank you for your time, I hope this has been interesting. Please let me know your thoughts in the comments.