I’ve been bothered by all of the remastered classic RTS that I’ve been seeing lately.

Don’t get me wrong, I love my fair share of the classics. I played Age of Empires 1 and 2 back in the days of yore, alongside Homeworld and StarCraft Brood War and the BattleZone RTS games. They are, and were, good games and I’ve been glad to see people given the opportunity to enjoy them again.

But it cheeses me off that the most popular real-time strategy game on Steam is Age of Empires 2 HD, the original version of which is something like 19 years old. The current version of Warcraft 3 alone, going by stats on Battle.Net, has a player base roughly the size of that of Company of Heroes 2. Via tools like OpenRA and CnCNet, players are able to access some of the classic command and conquer games, and it seems that thousands are resonating to these classics.

And that’s great. It’s wonderful. But, for a long while, it’s stirred up something close to honest-to-goodness resentment in me. It’s frustrated me that solid and interesting RTS like Homeworld: Deserts of Kharak are overlooked and passed by while remakes flourish. It makes me sad that experiments with new ideas and systems (including Dawn of War 3, which I feel has been unfairly maligned to a large degree) are looked down upon in favor of games that many of us began playing half a lifetime ago, or more.

And then, Blizzard announced WarCraft 3: Reforged. That was followed this week with an announcement from EA that Petroglyph (a core group of which came from Westwood and who have made much hay of that relationship, as well as having made more than a handful of games reminiscent specifically of Red Alert 2 in their mechanics) have joined up with no less than Frank Klepacki to remaster both the original Command and Conquer, as well as the original Red Alert.

My excitement at these announcements was followed pretty quickly by chagrin, which deepened into embarrasment. This was exactly how people excited by the Age of Empires remaster felt, of course. And how those that lovingly jumped back into Brood War felt when StarCraft was remastered. EA and Blizzard just, seemingly, exposed the hypocrisy of my negative feelings about video game remasters.

Well, I thought to myself, this is probably as good an inspiration as any. So, let’s look at Warcraft 3: Reforged and the Remastered C&C games, and talk about what part of the future of RTS games lies in its past.

The Benefits of Nostalgia?

Let’s get straight down to it: I do not feel that the future of RTS lies in its past. I actually wrote at length about this and still stand strongly by my thoughts as expressed. The RTS genre is stagnant right now, and needs to evolve

But, perhaps, I’d not sufficiently considered the benefits of introducing a host of new players to some of the strongest mechanics and gameplay systems (and characters) in the genre.The RTS space is still dominated by the specters of Command and Conquer, Age of Empires, and WarCraft, and maybe there’s something to be gained from a bit more direct navel-gazing in the genre, a bit more indulgence in the games that have inspired so many for so long.

Or, let’s face it, maybe I just had a stick up my butt about game remakes. I’m open to that possibility.

But, maybe bringing back and polishing up the gems of the past will do some good and has already done some good in terms of how people feel about strategy games. It’s pretty common to see people saying they’re no good at strategy games, that strategy games are too fast and competitive and hard, and that they’re not worth it. And then, of course, are the people who attest that there hasn’t been a good RTS since… well, Command and Conquer. Or Age of Empires. Or WarCraft 3. Or Homeworld. 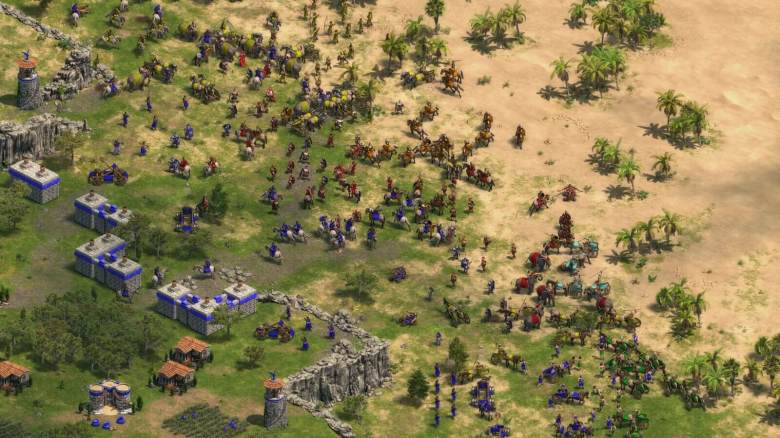 While I don’t agree with either of those sentiments, these remastered games can serve as a ‘hedge against the dark’ – giving the vocal segment of the RTS playerbase a chance to play again what are perhaps the only RTS they’ve ever truly enjoyed, while simultaneously ginning up fresh excitement about the genre, and maybe getting developers to think fresh thoughts about strategy game design at the same time.

It is that ‘maybe’ that worries me though. My persistent fear with this growing trend of revitalizing strategy games is that it might provide evidence that there’s no market for new thinking in the RTS space, and that the only viable path forward is either to make a Clash of Clans or Clash Royale clone on mobile, or to sell to nostalgia by recreating a beloved game from sometime before 2006. That’s a vision that makes me a little uncomfortable.

Games like Tooth and Tail, Command and Conquer Rivals, and They Are Billions give me some hope about the future of RTS. There’s some really good stuff out there, good studios that are doing work to make new things, to solve some of the problems that can arise in RTS design.

Let’s not forget about the work being done by studios like King Art Games (Iron Harvest) or Eugen (Steel Division 2) or Tindalos Interactive (Battlefleet Gothic Armada 2) or Plausible Concept (Bad North) et cetera while we’re indulging ourselves in some sweet nostalgia.

So, why was I so excited for WarCraft 3: Reforged and Command and Conquer Remastered when they were announced? What was the difference for me as contrasted with so many of the other games that have been remastered, or have had redos announced, over the past couple of years?

For WarCraft 3: Reforged, it’s all about the design. I write a lot about things like creep camps, and equilibrium, and things in games that can’t be taken from the player. And WarCraft 3 evidences some mechanics that to me speak of developer motivations along similar lines.

In short, I find the design of WarCraft 3 to be really compelling (might be a good time to do a piece on that in the near-ish future, maybe?). Getting to jump back in and suck at the game alongside a newly refreshed player base is really exciting to me. WarCraft 3 and Dawn of War are two of the most exciting RTS designs I can think of in terms of seeing developers try and succeed to start to address some of the rough edges of the genre.

Also, undoubtedly, WarCraft 3 has some of the best-designed units and factions in the genre, and getting to see Blizzard play around with the Arcade (hopefully?) and unit skins (maybe?) and new factions in this cornerstone RTS is deeply exciting to me both as a player of these games and a student of their design.

Now, regarding the old Command and Conquer games… We’ve heard that one of the reasons that Blizzard refuses to re-release its older games like WarCraft: Orcs and Humans, or The Lost Vikings is that they just don’t hold up today. Their interfaces and systems are just too antiquted to recreate without changing the core product, and their gameplay isn’t deep enough to keep modern players interested. Again, that’s without changing things to the point where the re-creation becomes a new product.

I’m a bit worried that the same thing will happen here. Command and Conquer and Red Alert are foundational games to the genre, but at what point would modernizing them push them past being “remasters” and into being unique products? Is the gameplay suitable for the modern gaming audience? It’s a blurry line.

The two main approaches to the game are, basically: to try and keep it as similar as possible to the original product, and to only  change the minimum necessary to make it work; or, ot try to modernize the game while still keeping it recognizable to players. And unfortunately, both approaches are likely to draw detractors.

I’m happy to give it the benefit of the doubt however, though projects like OpenRA have already put significant work into extending and rethinking the games.

C&C is an interesting space for a remaster, partly due to the large number of excellent-quality fan projects that exist and have helped players engage with these games for decades.

That being said, I’m really happy to see Petroglyph on the project. As Petroglyph love saying, many of their core members came from Westwood and have worked on many of the Command and Conquer games. And it shows in their work. There’s noticeable C&C DNA in games like Grey Goo, the 8 Bit Armies titles, and Forged Battalion. They’ve been making C&Clike games for years now, and to see them elevated this way is a pleasant thing for me.

So that’s where I stand. I’m still more than a little nervous about the overall trend of remasters, but the possibility space here is undeniable. The possibility of a resurgence of Command and Conquer games into the future is deeply exciting – it’s one of the best existing RTS formulas in my opinion, with some of the best characterization done outside of a Blizzard game. And WarCraft 3 is opening up the RTS space (and maybe the broader gaming community?) again to one of the most revolutionary strategy games ever created, with the weight of a dominant and cash-flush Blizzard behind it.

I’m going to keep pushing my crackpot ideas about improving RTS, and trying to advocate for new thinking in the genre, but I’m definitely going to be playing these remastered games in 2019 and 2020, and likely forward in time, as well.