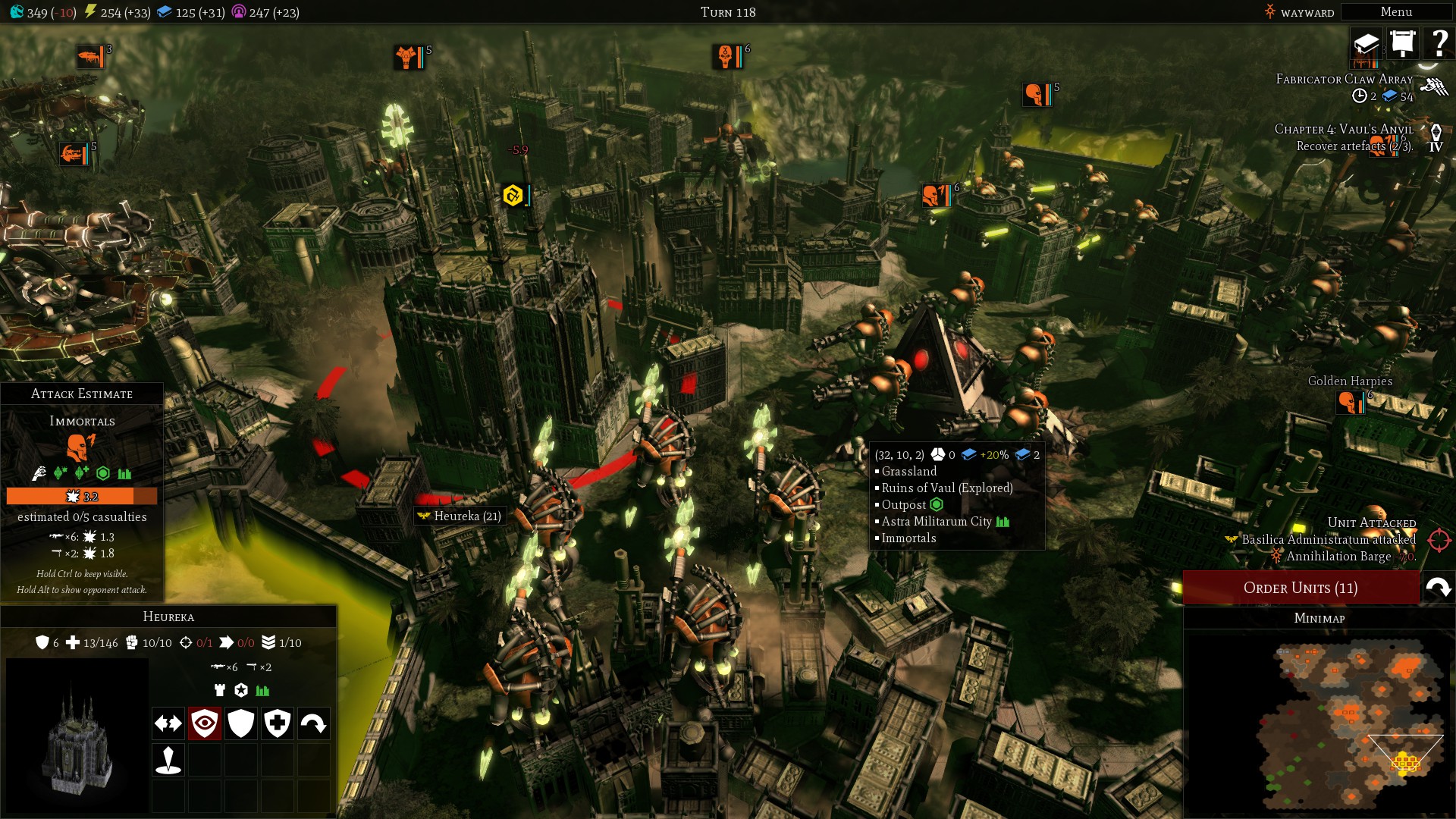 This year, one of my goals is to write at least something about each strategy game I play. Since my heyday in 2015-2016, I’ve really dropped off in terms of volume of writing and I’m trying to get back into practice. Fortunately for me, that means that I have a perfect opportunity to opine about some games I’ve played for years in some cases. One of those games is Warhammer 40,000: Gladius. And actually, the timing works out anyway since a new faction was just added to the game: the T’au landed on Gladius Prime about a week ago.

First off: you will have to forgive me some of my bias here. Because, you see, I love the Necrons. I just have a real positive bias towards those teleporting, regenerating metal skeleton robots and that might color my perceptions of the game just a bit. Fortunately, that out of the way, the game is pretty darn good on its own merits. It’s certainly not for everyone, but as a combat-focused, Warhammer 40K-flavored TBS, it does a lot that is admirable (if sometimes a bit frustrating).

In a lot of ways, Gladius is similar to a 4x. You have cities that take up multiple tiles on the game map: each tile can house 1-3 structures. If you expand your city onto one of the various map objects (we’ll cover those in a bit), the object take up that whole tile and be unavailable for faction buildings.

Cities grow in population over time, if supplied with appropriate amounts of whatever your faction eats (some factions don’t use Food as a resource, like Necrons, who consume Ore). And each building requires a population unit in order to function properly: too many buildings and not enough population, things start getting inefficient quickly. Anyway, the city/building interface is in some ways similar to Total War or how some space-faring 4x games handle planetary populations. It’s a game of icons and requirements.

There’s not too much to managing your cities, so if you’re looking for detailed economic simulations you should look elsewhere. Cities are mainly there as a limiting factor to how large an army you can train, field, and control at any one time: each troop you field has an upkeep cost, so more troops than you can afford to keep active will start draining your income and cause issues down the line.

The game is mostly focused on fighting.

Earlier, I said the game is kind of like a 4x. This is true. But in terms of ‘exploiting’ there’s really only one option and that option is ‘exterminating’ your opponents. There’s no diplomacy in Gladius. You train up an army and fight over territory and wipe your opponents off the map. It’s brutally straightforward.

Now again, this might not be for anyone. But personally, diplomacy options in games like Total War don’t really feel that good to me: they’re blunt instruments anyway. So foregoing them works well for me. I’m not a diplomacy guy in strategy games, and I don’t miss it in Gladius.

Anyway: above, I mention capturable map objects. Spread across the map are Relics, Trader Encampments, Distilleries, et cetera. These can be captured by moving a squad atop them: typically, they’ll provide a trickle of one of the game’s resources each turn. Being incorporated into a city will ‘lock’ them to your control until the city is destroyed but confers little additional benefit. Additionally, standing a squad on them will provide healing over time until the squad reaches max health.

As I said, the game is really focused on fighting. This is in some ways the game’s greatest strength, but there are some rough edges that have left me frustrated from time to time.

First off: each unit is a single ‘game piece’ of approximately 1-10 squad members. Each squad member impacts the overall HP of the squad and overall damage output of the squad. As squads lose HP they lose members: this is not like Company of Heroes, where it’s possible to have a squad with all 4 soldiers, each with 10% health. If a squad in Gladius has 4 models and takes 25% of its HP in damage, it will lose a model. Conversely, if it gains that health back the model will pop back up.

No 2 squads can occupy the same tile. Again, these are analogous to physical pieces on a board game. This isn’t like some grand strategy games where armies are a single piece on the game board/map that represent the combined strength of all of the units within them. Each squad is a thing and occupies space on the map.

Each unit being a thing that takes up space can occasionally bite you in the butt on some of the more space-constrained areas of each randomly-generated world map. It makes positioning occasionally tough. Which can be a fun challenge! However, this brings me to my core complaints about Gladius.

First off, each unit is ordered separately. This isn’t a big deal when you have to schlep your army across the map or it’s the early game and you only have a handful of units. But for Tyranids and Astra Militarum and Orks in the endgame, it can be a chore to have to manually order each squad and wait for it to execute its order before ordering the next squad et cetera. This is one plus for Total War’s approach (it’s also done in many other 4x/TBS/Grand Strategy style games, but Total War is my reference point), since you can just move your whole army as a single game object until the fighting goes down.

It’s probably a personal preference thing more than a mechanical issue, but it can get a little annoying to move and order and juggle all of the units you usually end up with in the late game, especially since the game doesn’t like you to execute a new order until the last one has already resolved. Queued orders such as movement can be resolved simultaneously, but that is only sporadically a time-saver. It’s a bit of a compromise but not honestly a huge pain, though occasionally it does irritate me slightly.

I need a place to put this, and here is as good a spot as any: maps in Gladius are straight up fraught with danger. Giant robots, roving bands of marauders, mutant Enslavers that steal your troops from you. I actually started having more fun with the game when I changed the amount of neutral spawns on the map. They can be devastating if you run into them at a bad time, and its often hard to avoid them (especially with how the game treats unknown territory as blocked).

One thing I want to point out before I get to heroes. Proxy Studios, the game’s developer, have put a lot of work into describing EVERYTHING in the game. As is standard for this type of game there’s an in-game encyclopedia with lore, stats, and pictures for most of the terrain, features, creatures, units, and factions in the game, and it’s all a click away. As someone who’s mostly used to RTS, where this sort of thing is about 30 years away from being standard anymore (Age of Empires had this sort of thing for instance).

Want to know more about the Enslavers? You’re golden. Need details on what a Grox Pasture will do for your war effort? It’s all there, with a little flavor text blurb to boot. It’s a little touch but I appreciate the effort.

Anyways, back to the combat.

In most games, I really like hero units. They’re less exciting for me in Gladius, though they’re a core feature of the game. Heroes have experience and can level up, gaining and leveling their abilities over time. There are items that your faction can find and equip to heroes to increase their power and change how they function. It’s all well done. I can’t pin down why I feel ambivalent about them. Maybe it’s the added complexity of their abilities on top of the combat, which as I said can start to feel a little heavy to me once you have more than a literal handful of squads on each side of a battle?

With all the abilities and positioning, combat can actually be really fun and engaging for all that I’ve been nitpicking about what I feel are rough edges (I have no idea how to resolve my quibbles either, another thing that makes me feel a bit bad for voicing them).

In addition to completely unique units with unique passive attributes and active abilities, each faction also includes a number of more standard special cases: Tyranids and Necrons don’t use Food, for instance (Tyranids combine both Food and Ore into a single Biomass resource) while other factions have different relationships to Loyalty, Influence, and other resources. Ork units, for instance, can gain Influence – which is basically a global mana resource – by killing enemy units, but their units also have a passive Influence upkeep, making it harder for them to maintain.

The factions right now are: Space Marines, Astra Militarum (Imperial Guard), Necrons, Orks, Tau, Tyranids, and Chaos. There are also of course neutral critters aplenty on Gladius Prime, and they can be nasty mo-fos indeed.

Tau, of course, were just released into the game and I haven’t seen too much of them yet: I’m in the middle of badly losing a Chaos game where I chose a bad time to assault an Astra Militarum stronghold at the exact moment a giant Tyranid army showed up outside my only city – after realizing far too late that I accidentally spent too much of my once-abundant Influence to be able to found a second city. Such is the way of things, I suppose.

One of the advantages to waiting so long in order to compose my thoughts about this game is that I’ve realized I’ve been playing it almost since it launched – I picked it up around the time they added the Necron faction and have been returning to it fairly regularly ever since. I’ve played through 4 separate campaigns already: Necrons, twice: Astra Militarum once and Chaos once. I’ve had 3 or 4 aborted campaigns for each of these, as well as started a Tyranid run just to see what all the fuss is about.

All told that makes Gladius a pretty persistent entry into my game rotation. It does have some issues which I addressed above, but its combat and the gestalt of its design has kept me coming back. I can’t promise that everyone will appreciate it in the way that I have: you might want to be able to have your Tau initiate diplomacy with the Space Marines, maybe? Or ordering 30 units around the late-game map might put you off, or whatever. But I’ve definitely found some staying power in Proxy’s 40K TBS, and I’ve happily bought all of its DLC to provide more reasons to keep coming back.