Going into 2015, the RTS playing field is pretty sparce. There’s StarCraft 2, of course, and Company of Heroes 2. Grey Goo, Offworld Trading Company, Homeworld Remastered, Wargame and Age of Empires 2 HD, and (at a stretch since this isn’t really an RTS) Total War Attila are the main players right now, off the top of my head. And even so, at its peak StarCraft still has a player base more than ten times that of Company of Heroes 2, which is likely the second most-played competitive RTS right now.

On the horizon, though, we are seeing 2015 shape up to be the Year of the RTS. With Grey Goo and Offworld having already launched this year, we have a slew more coming towards the end of 2015 into early 2016, including Legacy of the Void and a couple of entrants just announced by Stardock: Servo, and Ashes of the Singularity.

Releasing on March 24th, however, we have a pretty unique RTS that raised my eyebrows a couple of months ago: a little game called Etherium, by Tindalos Interactive and published by Focus Home Interactive. This is Tindalos’ second foray into the strategy space, their first PC title being Stellar Impact, a MOBA of sorts (I’ve taken to calling this type of game ‘RTesque’). Etherium is much more a standard-fare RTS than Stellar Impact, with base building (sort of) unit management, resource management, upgrades, and armies clashing into one another. It has a robust feature set and has some very good ideas in its repertoire, but as with many RTS games developed by smaller studios, it has some implementation issues that may drive players away.

Here are my initial impressions. Please keep in mind that to date I’ve spent a dozen hours or less with the game as a part of beta testing in a multiplayer context, which is not the best breeding ground for a deep understanding of game mechanics. I may still be missing complete information about some aspects of gameplay (e.g. unit interactions in combat, how certain weather effects work) so take the mechanics section with a grain of salt.

What Is Etherium? – The Basics

Etherium is a science fiction real time strategy game with a tactical focus. It falls somewhere between Dawn of War 1 and Dawn of War 2 in its emphasis of economics vs tactics. It tells the story of 3 races: a Human corporation called the Consortium, the high-tech Intar, and a machine consciousness called the Vectides as they vie for control of Etherium, a resource which (apparently? I haven’t played the single player so I’m not 100% up to speed on the story) comes from another dimension. As a resource, and as a premise, it’s not terribly inspired. If you’re going to focus your game on its resource, you need to have something interesting and tactical in its own right, like Tiberium or potentially dangerous to harvest like the Spice Melange (Command and Conquer, Dune). Either way, the gameplay doesn’t really push this premise on you too much.

Etherium takes nods from a wide range of RTS games and conventions. The core game has some broad similarities to Company of Heroes, with the map is divided into territories which the player must capture. Some of these territories will contain Etherium veins, which can only be mined by the player in control of that territory. Also similar to the CoH games, territories must be connected to one another in a direct line to the player’s base sector to provide benefit to the player, making it a valid strategy to cut off enemy sectors close to a player’s base, depriving them of the benefits of more than 1 sector at once.

Players control territories via pylons or monoliths located in their rough geographic center, which must be captured by Communications Squads and only Communications Squads. These squads, furthermore, are spent when they capture the monolith, so matches which have back-and-forth action will likely see many of these produced.

When a player captures a monolith, a hub is constructed around it and the monolith’s zone falls into the player’s control. The hub will have either 1 or 3 slots, depending on whether it is a ‘large’ or ‘small’ monolith. All structures, save Etherium Refineries and turrets, must be attached to these hubs. If a hub is destroyed, the territory falls neutral and all of a player’s structures within the territory lose power and will not function.

If the sector was one that connected a player’s other sectors to their base, then the player loses all of the benefits of all structures on all hubs on disconnected sectors, and all towers or refineries in these sectors stop working as well. This means that a player would lose access to tech levels, unit limit increases, any any buffs provided by structures. Losing a ‘cut off’ sector could in theory lose a player a match right out (though there is an exception to this which I may mention later).

Since I’m getting a little in-depth for a broad overview, let’s move on to a new section.

Here’s a video demonstrating the gameplay:

Some of the hallmarks about Etherium are its cool ideas. This game features:

Each of the 6 map terrain sets has its own unique weather feature, much like blizzards in CoH2. These are periodic events that can do anything from ground air units and reduce site lines across the map, to localized roaming ‘sandstorms’ that damage and immobilize squads caught within them. This makes each map tileset more interactive an unique than what you’d experience in most other RTS games.

There is a ‘space port’ structure which provides a call-in point for units and several unit-affecting abilities. For instance:

Each faction has 6 global abilities or ‘offmap’ call-ins as they’re called in Company of Heroes. The player has a finite pool but recharging pool of Command Points which they spend to use these abilities, which they can increase via a structure. The player must spend both a # of Command Points and a # of Etherium to execute one of these abilities. All factions share 3 abilities: a temporary speed boost for one squad, an Extraction ability which saves one squad (that must be then re-called in at a space port) and a small area damage ability. All factions also have 3 unique abilities, as well.

Within each match, in the skybox, players can see the fleets from their respective factions duking it out. This is more than just cosmetic (though all units are called in on dropships from the fleet, which is a neat effect) as players can construct up to 5 orbital cannons on hubs that deal damage to the opposing fleet. As an alternative victory condition to the standard ‘destroy enemy base,’ a defensive player could ‘take out’ the enemy fleet by waiting out the ‘fleet health’ bar. If a player’s fleet health or base health reach 0, that player loses.

Many maps feature 1 or 2 minor factions. These occupy 1 sector (each, if there’s more than 1) and, if a player meets a certain condition, the appropriate sector and a handful of specialized squads will fall into that player’s control. Each player has a separate ‘allegiance’ bar for the sub-faction, and whichever player meets the condition first will win those units. This allegiance bar’ is globally visible so each player knows if their opponent is gunning for the sub faction and how close to the goal they are. Sub factions can be killed off in addition to or instead of being won by a player, and the subfaction sector contains a large monolith with a 3-slot hub.

As with many RTS games, especially those made by smaller studios, Etherium does is not cutting-edge graphically. It looks nice enough, with some neat scenery doodads and nice touches such as dropships arriving to deposit units when they’re purchased, or little rockets launching to ferry Etherium (the game’s resource as well as its name) up to the fleet in orbit. The game has a lot of neat little touches like this. I’d say the graphics are ‘good enough’ – there are some standout terrain features, but for the most part unit designs feel a little uninspired. The game reaches a lot higher mechanically than visually, which I actually think is OK for a small-studio RTS.

The UI, however (see above) is frustrating at best. It’s scattered, with elements in all 4 corners of the screen, meaning there’s no good location to reference for information. You get used to it, but the UI is quite weak overall, which could easily frustrate RTS novices.

Also, the hotkeys are inconsistent. Genre standards like ‘A’ for attack move, ‘S’ for stop etc are not present, and many UI elements seem to not have key bindings at all; for instance, the build panel can be navigated with RTYUI (I believe) but once you open the appropriate unit/structure tab, you are unable to select an option with a keystroke and must click it. This is pretty unfortunate for a genre where speed and accuracy are so important. 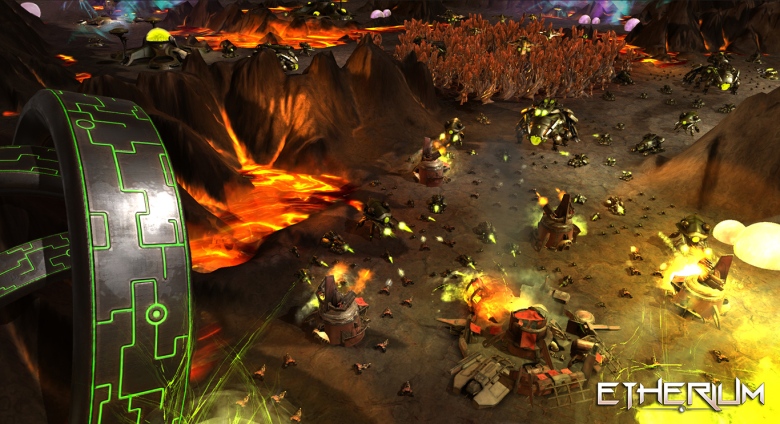 One of the less cool features, in my mind, is that for the most part, all factions’ units have exactly the same stats. All units have the same anti-infantry squad, the same tank squad etc. Each faction has 3 unique units, 1 unique structure and a handful of unique features (such as an extra squad slot or the ability to place more turrets per sector). Also, as far as I can tell, no unit is more than the sum of its stats: no unit attack has special effects (debuffs) and no unit has special abilities.

Also, aside from impassable terrain and infantry cover, maps are entirely and exactly flat. No cliffs, no nothin’ just flat plains. It’s not awful, but it’s a little monotonous at times. Maps also tend to be a little choke-pointy, but that’s a design decision and can be corrected based on player feedback (or maybe they’ll release mod tools).

Pacing is an issue, at least from a ‘first impressions’ standpoint: the fact that turrets are designed to be placed in every sector, and their relative ease of construction and power relative to cost with abundant map chokepoints means that matches end up tending to devolve into static slugfests while players wait for t3 bombers or t4 siege weapons. That being said, I haven’t experimented extensively with dropship play which is a potential way to circumnavigate choke points.

Unit combat is, by and large, fairly slow, though individual squad losses can be devastating. Combat doesn’t feel very compelling at this juncture, however, with masses of units plinking away at each other while special abilities rain down upon them. Something to spice up the combat and make it more dynamic seems imperative given a game of this relatively intimate scale (players tending to have about 9-12 squads or so in the late game).

Etherium is most commendable for its ideas, its lofty goals. However, its small team has resulted in a lack of polish that has rendered the UI frustrating to new players, and the faction design somewhat limited which is unlikely (though not assuredly) to compel veteran players. For either RTS newbies or RTS veterans, there are some interesting design decisions and some that are likely to cause frustrations. The gameplay itself can be fun, though the player will have to overlook the game’s foibles in order to enjoy it. I have no issue killing hours in multiplayer matches, and am skeptical but hopeful that Etherium can gain a dedicated mulitplayer population and that Tindalos can find elegant solutions to some of the game’s more obvious rough edges.