So I’ve struggled to really love the two most recent “big” RTS games to come out recently, Homeworld: Deserts of Kharak  and Ashes of the Singularity, I still enjoy them but they aren’t holding my interest so far. So the past few weeks I’ve gone down RTS memory lane and played some of the older RTS games I enjoyed when I was younger. Obviously I found some RTS have held up better than others, I even wrote about one of my favorite RTS that I don’t think has aged well, but I’ve found a few games that do seem to still stand out today.

With that in mind I set about to play a number, but obviously not ALL, older RTS games and make a list of my top 5 RTS games that still play well today. This is obviously an objective list but I did try to remain objective as possible with things like pathing and graphics, but my own feelings on the smoothness of play, mission design and multiplayer features will have an impact, so let’s get started. I will only be using games that are 15 years or older, I know it’s a tad arbitrary but it was a nice gap between RTS generations as well. Now this won’t be ranked in any order other than my own fancy:

The first Warcraft may have been a founding member of the RTS genre but its pathing, poor story telling and weak faction design make it hard to play now. The third Warcraft had the most complex story of the trilogy but its graphics have aged badly and it’s hero design seems out of place now. Warcraft 2 straddles the line with gorgeous sprite graphics that still look decent today, iconic unit quotes and music and has a compelling story.

While the main game has a bit of a repetitive campaign, island maps as far as the eye can see, its expansion Beyond the Dark Portal introduces demi-hero units (no special abilities just more personality and higher stats) along with much, much improves mission design. While I love the story of Warcraft 3 I’d have to say Beyond the Dark Portal is my favorite version of any Warcraft game. While it’s two races are overly similar, with only their spell casters having much difference, their visual design is crisp and clean, something other games from around the same time struggled with. 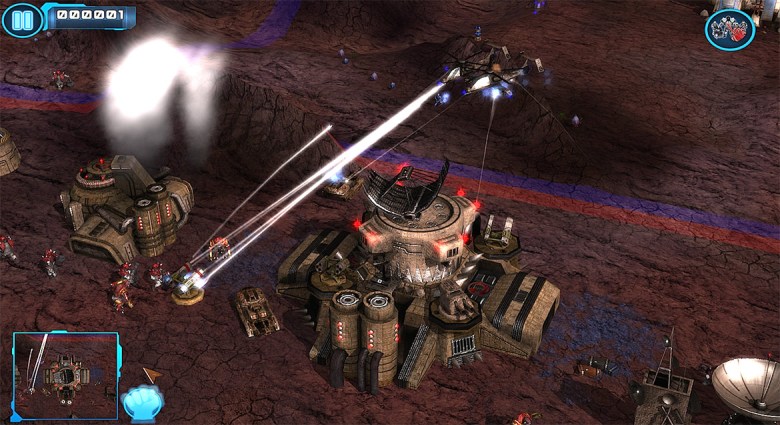 A strange choice I know, and I’m not sure how much I can say since this is more of a niche game but I never played this game when it came out, only recently discovering it but it’s surprisingly similar to other big name RTS but has such a clean gameplay style, UI and faction design that is pulls of this theft well. Now of the games listed it probably has the worst campaign and story but its controls and UI are so smooth and intuitive that any RTS fan can immediately pick it up and play. Combined with fun units, 3D models that recently got remasters (though still don’t look great), a catchy soundtrack and some pretty creative maps and you’ve got a simple and fun game, even if it has it’s flaws in story and graphics. [Wayward – I’ve gotta say I loved the original ‘Z’]

For those who have not played it, Pikmin is actually and RTS with both an economy and army control for the Gamecube. Despite it’s nontraditional platform Pikmin was actually one of the most creative RTS games at the time featuring maps with very limited resources, alternate methods to victory and units that each have a specific purpose but also are your resource harvesters. While there are no factions in the game and multiplayer didn’t arrive till it’s sequel Pikmin has all the trademarks of a real time strategy:
– Economy management
– Army control
– Reliance on map control

Each Pikmin in your army has a different purpose, some are fireproof, others can swim, some can carry bombs and having the right units for the job is vital. While the game is PvE only it’s campaign is a well tuned open world that still looks good today due to much of it being static images and the simplistic Pikmin design. On the control side it takes a few minutes to get acclimated, same for the UI, just due to being a console game but once you’ve gotten the hang of it things flow well, information is where you need it and your little Pikmin army obeys your every whim.

Containing all the campy science fiction action one could expect for a game meant to be orcs in space combined with the Warhammer 40k universe, Starcraft has a complex but cheesy story that is character driven and that is still enjoyable to experience today. While it’s graphics haven’t held up as it’s Blizzard counterpart on this list the three races still stand apart. These three races are also probably the most early example of complex asymmetrical faction design and it’s done incredibly well. There is a reason that even today Starcraft and it’s sequel Brood War are among the top 10 games played at public PC bangs around the world, it’s multiplayer is just incredibly well designed.

I also can’t talk about Starcraft without mentioning it’s iconic score from thrumming title screen to the rock inspired Terran 2 it’s songs will get stuck in your head. While it’s mission design is formulaic and didn’t borrow much from Beyond the Dark Portal, Blizzard at least tries, on occasion, and mix up the standard fare of “build army, cross map, win” mentality we saw in many games of the day. 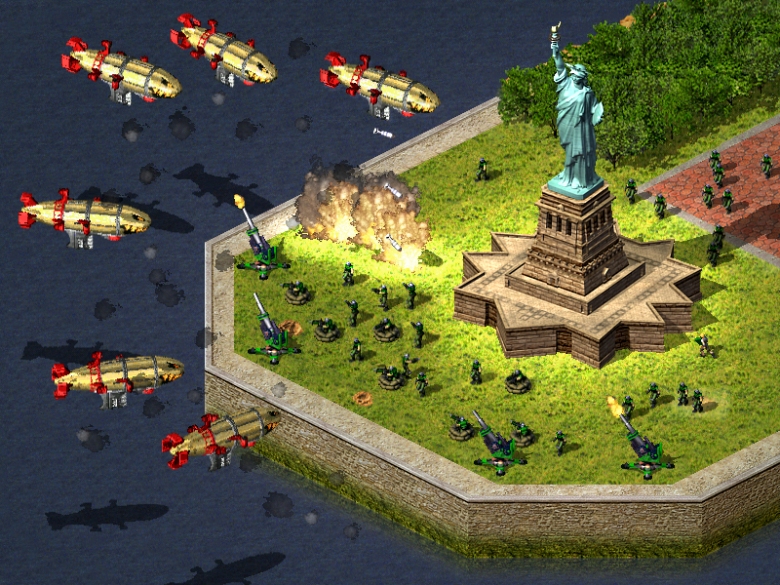 Like with Warcraft 2 you could pick up Red Alert 2 and get right into it, the control scheme is easy to use, graphics quickly allow you to know what is going on, which faction you are, etc and the game has some fantastic sound bits (GI’s in sandbags have such a great gun sound). Similarly to most of the games here Red Alert 2 has a fantastic campaign and like other Command and Conquer games of that era it had gloriously horrible live action videos telling the story. Of the Command and Conquer games Red Alert 2 and it’s expansion are probably my favorite story wise and feature one of my favorite RTS villains with Yuri.

Red Alert is just a game that is both fun and easy to understand, even 15 yeas afterwards. Clean graphics, good mission design, varied faction design, fun story, zeppelins, dolphins, squids, Tanya, Yuri, crazy Einstein, retaking the Statue of Liberty, it’s just a fun game, which I think is a sign that a game is holding up well.

As I said, I obviously didn’t play every RTS from 2001 or before but I am pretty happy with my list, while two may be new to some I’m sure the other three will rank highly for any RTS fan. So which RTS games do you think anyone can go back and enjoy, even years after they came out?