Last year I drafted a (semi) formal post talking about my plans to produce My first SC2 Arcade project: “Remnants”. I followed up with early descriptions of both factions and covering each faction’s Tier 1 units (though I have since changed some of the Dendrites Tier 1 units and added some to the Constructors). Now, since I’ve more or less fully implemented all of the game’s core systems (and I’ve streamlined the game’s Power system from how I described it before), I thought I’d go over them with you in detail, to try and paint a picture of how the game will be played.

Scrap is the primary resource in Remnants. It is primarily harvested from ‘deposits’ on the map, similar in some respects to Mineral Deposits in StarCraft. However, there are several notable differences.

First off, Scrap is not set up in ‘base locations’ like Minerals are in StarCraft and is instead distributed around the map. Additionally, individual Scrap deposits often don’t hold much scrap at all, and are quickly exhausted. This results in the player needing to continually traverse the map to secure more Scrap to build up their forces. 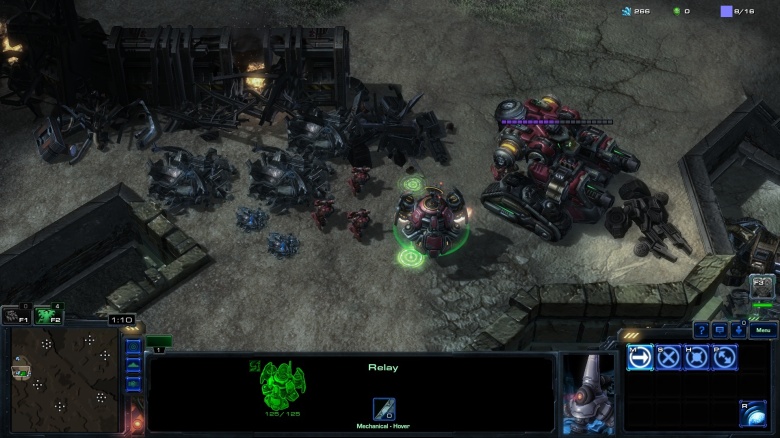 Scrap is able to be destroyed, and the remaining value of a scrap deposit is also the health of the deposit. For balance reasons, most units do very little damage to Scrap, with only a few Tier 1 units able to do full damage to any unit with “Scrap” type armor. However, any damage to a Scrap deposit reduces its value and makes it less useful to whoever ends up mining it. I hope to see scrap harassment become a viable strategy, and the defense of yet-to-be-mined Scrap fields become a priority, especially later in the game when Scrap-killer units start to become more common.

Now, ‘loose’ Scrap is only one of 3 forms Scrap deposits can take. They’re the low hanging fruit on the map, and are soon exhausted. There are 2 other sources of Scrap out there: Debris, and units.

Where Scrap is intended to indicate a small structure or vehicle that has been destroyed and can easily be pulled apart and smelted down, Debris would indicate a large building or crashed starship that must be broken down into more manageable pieces. Debris act like destructible debris in StarCraft maps, blocking traversal and/or ramp access, but drop Scrap deposits when destroyed. The catch here is that these behemoths have the Scrap armor type, so are virtually indestructible until units that can break them apart can be produced. This both acts as a gating mechanism (certain map areas can be made inaccessible in the early game) and a “late game” store of resource value. I expect Debris (and the treasures hidden behind it) to become points of interest once Tier 2 units come onto the field. 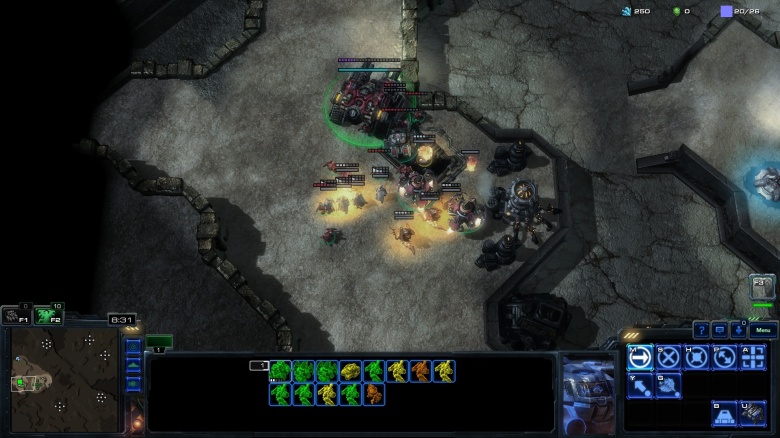 The third store of Scrap value are units and structures themselves. Virtually everything will decay into Scrap once killed. For balance reasons, it takes a unit considerable time to decay into Scrap. Currently, there’s a 5 minute window where any unit killed becomes a “burning wreck” with 60% HP and Scrap armor type. At the end of that window, whatever HP the unit has remaining is converted into a Scrap field of that Scrap value.

This way, players are encouraged to vie for control of old battlefields until the timer runs up and the Scrap is harvestable. Also, a player who feels they may not be able to control the Scrap when it becomes harvestable can attack the Burning Wrecks to reduce the value (or completely kill off) of the resulting resources. My hope is that fields of burning wreckage become ever-shifting points of interest on the battlefield as players vie for control of these reusable (though diminishing in returns) resources.

Lastly, each faction has a T2 method for getting access to burning wrecks early. The Constructors faction have a “processing” effect that will take any unit or burning wreck and convert it into 25 resources (to be adjusted depending on balance). This can be used to kill enemy units, clear out fields of wrecks at a loss, or to quickly recycle one’s own units in a pinch. Currently, “processing” is an ability available to the Constructor at T2, and to a single T2 unit, which depending on research choices, the player may not have access to.

The Dendrites cannot process units into scrap metal, but they are able to resurrect them. I haven’t implemented this yet, but see it working in one of two ways. First, a T2 ability may work like WarCraft 3’s Undead Death Knight hero’s ultimate ability: a small group of units would be resurrected temporarily (with whatever health their Burning Wreck would have had) after which they’re permanently destroyed. An alternate method would be “spending” an existing unit to permanently resurrect an individual unit with whatever missing health its wreck had.

Ok, now that we’ve explored the Scrap resource and all of its facets, lets move on to the other major resource and its harvest mechanism: Power, and Bases.

Just as in StarCraft, many units require Energy for their abilities. Additionally, Remnants utilizes what I’m calling a “soft ammo” system that will treat Energy as weapon ammo, and will penalize units in various ways when they run out of ammunition. One example of this is the Junkslinger unit, which has 100 Energy. Each shot it fires at an opponent costs 10 Energy, and it has an area damage ability that costs 60 Energy. When a Junkslinger’s Energy is exhausted, it fires more slowly and its range is reduced. It’s still able to participate in combat, but it’ll be less valuable and more vulnerable.

On top of all this, very few units regenerate Energy on their own, and instead rely on Generators and Power Nodes for this. 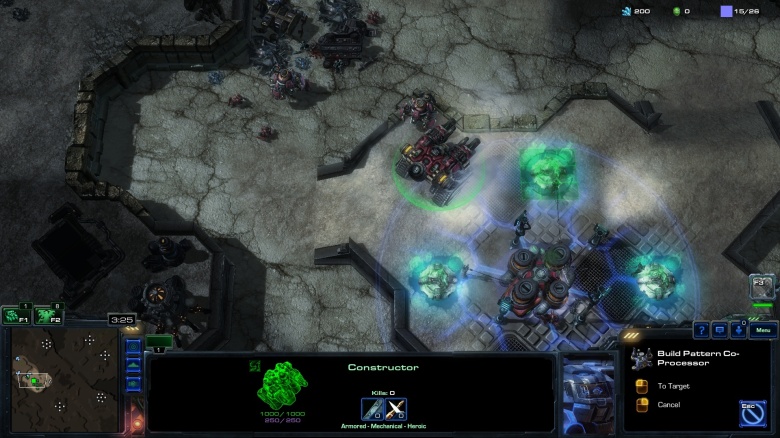 The Generator is a single point of failure for a base. If a Generator is destroyed, all attached structures (including Power Nodes) become neutral and unpowered, and the player loses all benefits conferred by the structures. Any player who builds a Generator on a base location gets control of all attached Power Nodes and structures. I hope this will make base harassment and competing for ownership of the map’s bases a core and interesting part of gameplay.

Now, the Base is also the primary way in which units gain Energy. Each Power Node attached to an active Generator slowly builds up an Energy reserve, and will automatically share it with all units in range, as long as it has Energy to do so. Power Nodes work, conceptually, like Moonwells from WarCraft 3 or Protoss Shield Batteries from StarCraft Brood War, with two notable exceptions.

First, the player is unable to build additional Power Nodes. There are only so many attached to each base. Second, they serve as the base for almost all game structures. Players build all their buildings atop Power Nodes, and once built upon, the Power Node diverts all its Energy to powering the structure on it, and it cannot provide Energy to units.

As players build structures to increase their tech options, a base becomes less capable of providing Energy to the player’s forces, forcing the player to expand to additional Base locations to keep their armies supplied with Energy. Both Bases and Energy are scarce resources, and I’m very excited to see what players do with these systems.

One final note about Bases. Currently, structures built by another faction do nothing for a player, but can be sold for 75% of their build price. The sale takes 60 seconds, is able to be canceled, and is paused when the building is unpowered. This allows a player who has lost their base a window to reclaim it before their investment is sold off by their opponent.

Games which include victory conditions apart from “destroy the other player” are inherently more interesting than those without, in my humble opinion (that’s something I plan on writing about soon. In that vein, I am planning to implement an alternate victory condition for Remnants. The current plan for this is as follows:

There exists on the wrecked map the remnants of an ancient technology which could ensure that any AI capable of decoding it would be virtually unstoppable on this ruined world, able to escape it forever or dominate it utterly, depending on inclination. This system has 3 parts, each in a different area of the map: a mainframe, which cannot be controlled unless the player also has control of at least one of its substations. If a player has control of at least one of the substations, they’re able to take control of the Mainframe, which will start counting up victory points. If at any point the player loses control of either the Mainframe or their last substation, their victory counter will stop.

Because the Mainframe is the only mechanism for delivering victory points, only one player or team will be able to accrue victory points at any given time. Likewise, because the system requires both control of at least one Substation and the Mainframe together, the player is required to maintain forces in multiple map areas to gain VPs.

Should the above system prove too cumbersome for players, I’ll revert to a more standard VP system like the one seen in Dawn of War 2.

I’ve designed the core systems in this game with a couple of primary goals in mind. First, to make the player feel resource pressure. Second, to keep the player fully engaged in maintaining a presence in multiple areas of the map. Third, to provide systems other than raw force of arms that can act as a power leveler: killing opponent’s resources or denying them access to Energy are viable ways to starve them out over time.

I’m (slowly) getting closer to a playable prototype and I eagerly await player feedback. My plan is still to release a version on Battle.net as soon as all Tier 1 structures, units, and upgrades are complete for both factions. This is likely to happen before I build in the alternate victory condition, which I see as one of my final steps.