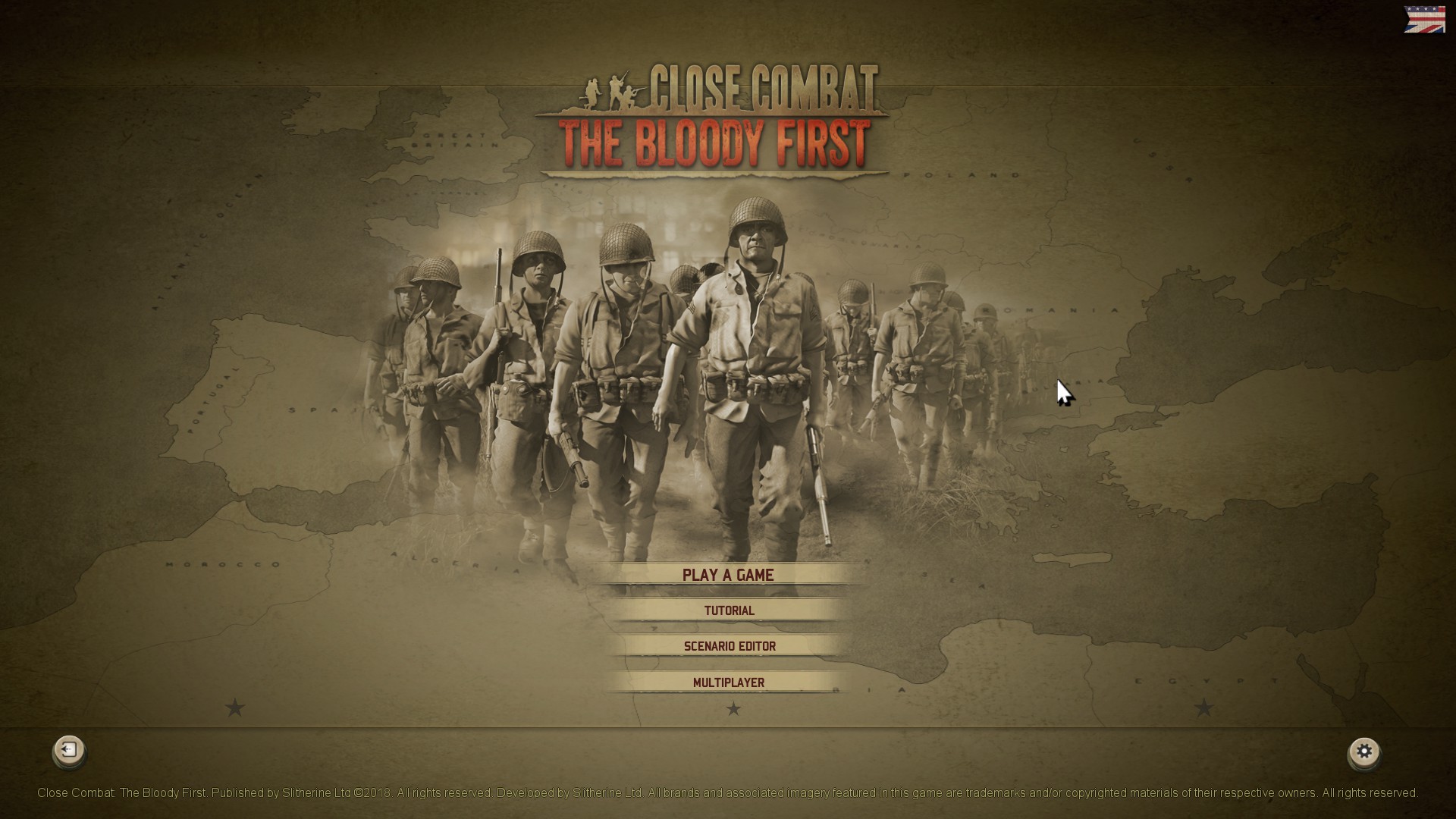 Without wanting to give too much away up front, I have found something uniquely frustrating about longtime tentpole Real Time Tactics franchises. I’m talking games like Sudden Strike 4, Blitzkrieg 3, and yes, Close Combat: the Bloody First.

For the most part I’ve actually found that I enjoy Close Combat: the Bloody First. But, I think there’s this idea that tent pole RTT games have that the standout features they’ve relied on for years are key differentiatiors, and will help them stand apart from the crowd of other tactics and strategy options. And I’m not sure that’s true any more.

While systems like morale, terrain impacting unit movement and abilities, roads conferring speed bonuses, multiple weapon types per squad, and such features might have been more unique to tactical games twenty years ago, we now see similar systems in games like Steel Division, Company of Heroes, Men of War, and more. ‘True’ line of sight systems have also increasingly made their way into RTS, and they just don’t feel as unique or special as they might have back in the late 90s or early 00s. This was a big problem of mine with Sudden Strike 4, a capable RTT that ultimately failed to make much of an impression on me, in part due to its clunky control scheme and camera.

I’m not a big follower of the Close Combat franchise (in that mostly I’ve just heard about the games), but decided I’d make a foray into it with Bloody First, since I am a fan of tactics and wargames (if a bit of a novice at them) and hope springs eternal. I’ve heard the praises of this series sung out for a long time now, and wanted to take a look.

For better and worse, there always feels like there’s so dang much to *unpack* with these games. In Close Combat, each squad member of your troops has an individual name and morale and status, which is visible when you have them selected. It’s unclear to me what effect this has on the squad’s morale or chance to be broken, which is a shame since I imagine there’s a bit of nuance built into that system. I’ve found morale to be a bit opaque (as is too often the case with tactical games I think) beyond the mere fact of taking fire is going to lower it.

How far squads can shoot, and see, is something else that’s a bit murky to me. In some ways, Steel Division and Wargame do this a bit better than Close Combat: The Bloody First, since you can be reasonably sure that standing behind a fence or behind the crest of a hill or inside a treeline is going to block enemy vision and keep your troops at least somewhat protected. I haven’t yet figured out good places for troops to stand or path through while minimizing return fire, which is highly frustrating and has led me to restart scenarios more often than any other thing in the game.

Still, overall, I compare Close Combat: TBF favorably to Steel Division 2 in terms of combat. Both games have a similar system of strategic points spread across the map that dictate each side’s territorial ownership. Both games care about elevation (I think TBF does slightly better here with its elevation map) and – this is important to me – you can turn the UI on and off in TBF with a single button press, to make for better screenshots.

The context menu for TBF is a nice touch – once I got used to clarifying every order, I saw the advantage to it even though it remains a bit clunky in practice. It’s mostly annoying in the early game when I want to issue orders to each squad under my control, one at a time.

The most frustrating thing about playing games like this, and this one in particular, is the feeling that there’s a lot going on under the hood and being unable to take proper advantage of it. How does the player use smoke to their advantage, for instance? Company of Heroes 2’s smoke mechanic is really visual and straight forward so you know if you’ve used it well. The mechanism for smoke in TBF is much less clear to me. I try to set up smoke between the squad I’m issuing the order to and the primary source of incoming fire, but there’s no clear indication to me if I’ve succeeded in preventing the enemy from seeing my troops. I basically take it on faith that I’ve done something positive, and hope for the best.

Is holing up in a house an advantage or disadvantage? Again, COH and COH2 make this a really clear proposition: your troops take a lot less damage from small arms fire in a house, but grenades used against them (or flamethrowers) are a death sentence. Many times in TBF, I feel like being in a house is just limiting the firing arc and vision of my squads. It doesn’t seem like a net positive most of the time.

Futhermore, I’m not sure about how or when squads choose to surrender to the enemy. I’ve had squads make that choice when far away from enemy forces and I don’t know why they didn’t flee. The hidden rules behind that decision flummoxed me a bit (especially since the squad in question was the command squad for that particular scenario).

For all that, the scenarios and campaigns have been a lot of fun. For each scenario in one of the meta-campaigns, you start off my choosing your deployed forces from your larger reserve army. I don’t know the pros and cons of all the various squad types (again, more ‘game-y’ games have an advantage here since it’s relatively simple to parse the pros and cons of individual units) but have done OK so far with the included auto-picker.

For each mission there’s a handful of screens that let you choose things like waiting to attack at night, or to attack immediately without waiting to regroup, and the game provides a simple calculus of choosing to rush or wait for an assault scenario. Waiting means a better-prepared enemy, but you can gain offmap abilities and have a larger, fresher fighting force.

Additionally, you face meaningful attrition you across multiple missions as squads die and cannot be replaced. These are concrete and interesting events that the player feels in control of and able to make meaningful decisions about. If only more of the game were this way.

In combat, I’ve felt much more in control and aware of what I should be trying to do than in Steel Division. Part of that, I think, is that in TBF you don’t trickle your forces into the match over time, but start out with all of your army on the map. Part of it, too, is smaller map sizes (though the maps are a bit smaller than you might think, given unit sight ranges and attack ranges in relation to map boundaries). Beyond those two obvious elements, I’m a bit pressed to explain my preference since I feel that both games are a bit dense in terms of informing players of the relative merits of one troop type against another, or how interactions are going to play out. I’ve lucked my way into success more often in TBF, which might be a consideration.

I do feel, too, that my bias towards less realistic games might be hurting me in this regard. The dynamics between Space Marines facing off against Termagants at approximately 4″ of screen space apart is a lot easier to grok than the relative merits of an attempt to accurately model equipment and personnel involved in various WW2 conflicts based on real weapons and location data, inherently.

But as a game designer and player, I feel that wanting to feel knowledgeable about my choices and their outcomes is a fair one, as is feeling like the need to know precise data about German vs US weaponry at various stages of historical conflict can be a bit much for players. I’m all for accuracy, but surely there’s ways to present that data to players in a friendly way.

Being unsure of any good way forward, being unsure of your own capabilities, being unsure of whether you’re making a substantially good choice or a bad choice, these things don’t result in players being happy in a game. Unintended consequences are fine, but players are going to be frustrated if they don’t understand the parameters by which they can start making good choices. That’s how I feel too often in TBF. This is also true to some extent in Steel Division, though strangely I felt much more confident in the relative merits of my troops when I played Blitzkrieg 3. That game does a much better job of communicating to players what their squads should target and how they can be used to the player’s advantage.

All in all, I’ve actually been reasonably happy with TBF (believe it or not) though I stop short of being able to recommend it broadly to everyone. This mini-review hasn’t gone into details on some other outstanding issues that other reviewers have noted with game AI or issues with weapons targeting for instance. In a way, these frustrations might just be me railing against games that aren’t meant for me, or would be better if I committed more to figuring out what’s going on under the hood.

It’s likely that more serious players of WW2 tactics and wargames wouldn’t have the same issues I do with knowing the relative strengths and weaknesses of units or knowing where to put my squads for best effect. But I can’t help but think that the game could communicate some of these things more clearly to players.

I dip my toe back into TBF about once a week to continue tiptoe-ing my way through the Italy scenario. I would definitely consider purchasing another game in the franchise if and when they make more of them. But, like Steel Division 2, the rulset has me scratching my head wondering where I went wrong, and how to navigate the tools I’ve been given as much as it has me reveling in the tactical battle of mettle and metal (sorry) that I want. And that’s a shame.