NOTE – this article was originally published in June of 2014 on the website RTSGuru.com, a website which has since closed down. In an effort to preserve the writing it has been reposted, unaltered, here by Brandon “wayward strategist” Casteel – the original author and proprietor of this site.

Wargame: Red Dragon is one of the best games you might never play.

The third entry in Eugen System’s Wargame franchise, this is a game of incredible scale and scope, including hundreds of tanks, aircraft, helicopters, infantry, seafaring vessels and other weapons of war spanning over a decade, from before 1980 (some, like the T-34, hail from World War 2) all the way through to 1990. Eugen Systems, the developer, has put some serious chops into the game’s realism, with vehicles themselves having 12 stats, and weapons having up to 9 apiece, as well as individual ammunition levels and type(s) for each weapon a unit or squad might possess.

Maps span kilometers of space, with multiple towns, farmlands, forests, rivers, oceans and more included. It’s truly a spectacle, with nuanced and fulfilling gameplay worthy of it being considered one of the best games in the genre.

Unfortunately, all of this complexity is as much a bane as a boon, resulting in one of the steepest learning curves in the genre. Read on to get the full scoop on this amazing, frustrating game.

Wargame is a gorgeous game. Whether you’re zoomed in on an individual vehicle or structure, or zoomed out to see the entire map at once, Eugen has spared no attention to detail. It is unfortunate that in many cases, you’ll be zoomed all the way out to look at the map as a whole, or perhaps zooming in to watch a couple sectors, but it’s seldom that you’ll have the luxury to view things up close like the promo shots. Most of the time, the game will look more like this:

Much like Supreme Commander, you’ll spend the bulk of your time in Wargame looking at your units as a mass of icons. And this works, it makes sense. But darned if it’s not kind of a waste of those lovingly crafted vehicle and structure models. Even at a distance, however, Red Dragon has a lot to offer visually. The user interface is utilitarian in the extreme, which fits given the density of information the game is asking you to parse and process constantly, and keeps things relatively clear (even if I’m always a sucker for a fancy user interface).

The entire in-game UI can be scaled between one of 3 presets, and in my experience Extra Small is optimal. It’s nice though after years of inflexible user interface elements in games that Eugen has come around and at least provided options. The Minimap, too, can be scaled to the user’s preference (again, with a limited number of presets). It’s not much, but it’s certainly above what most other AAA rated RTSes are willing to provide from their UIs.

But, enough about the graphics and the UI. Let’s get to the true heart of the matter.

Wargame both is, and is not, frustratingly and even mind-achingly complex. Let me, ah, expound on that a bit.

At its core, it’s actually built on some fairly simple and straightforward concepts: build a ‘deck’ of units, divided into 2 main factions, and 9 major categories. The factions are BLUEFOR, including the US, the UK, France, West Germany, Canada, Denmark, Sweden, Norway, ANZAC (Australia and New Zeland), South Korea and Japan. BLUEFOR is typically deemed simpler to play or even downright better than REDFOR from a balance perspective. REDFOR, in its turn, is East Germany, the USSR, Poland, Czechoslovakia, China and North Korea. The Asian factions are new additions to this game, and are the origin of the game’s name (as should be painfully obvious).

Nations are, of course, not created equal. The USSR and the US tend to have the most and most well rounded selection of units. This is relevant as decks of units can be built thematically, by country, coalition (for example, Scandinavia, Eurocorps, the Blue Dragons, The Eastern Bloc, or the Red Dragons) by era or by type (mechanized, marines, support, airborne etc). Thematic decks provide bonuses such as extra unit slots, activation points, faction specific units etc. They, of course, come with downsides as well. such as restricted unit variety. 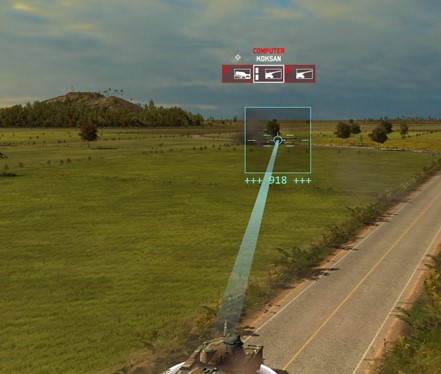 The unit variety and sheer number of unit and weapon statistics are a common stumbling block for new players. Weapons have up to 3 ranges (ground, vs helos, and vs air) an accuracy rating and a stabilizer rating, AP power, HE power, suppression and rate of fire. They also have types such as kinetic, Fire+Forget, Guided, RADAR, HEAT, and tons more. Units can have up to 3 weapons, each with independent ammo reserves.

Units have strength, size, optics, speed, training, stealth, and more. All of this adds up to a huge number of options to consider when building a deck, and ample room for new players to make poor decisions in terms of unit composition. Indeed, the game provides no direction for decks aside from the requirement of having command units, which are required to capture territories in the game. I’ll get to in-match play in the next section.

Deck building is an art, and if the player is unguided it can be a formidable task. There are guides on Steam, and the game’s subreddit has a weekly deckbuilding thread, but for the uninitiated, simply deciding what units to bring with you can be an incredible challenge.

At its simplest, gameplay in the Wargame titles is very straightforward. Move command units to control zones, gain points with which to call in more units. In Conquest mode, controlling more points worth of zones will build up a counter towards a total: reaching that total makes your team the victor. In Destruction, each unit rewards the enemy its worth in deployment points when destroyed, making that mode a contest in combat efficiency. In practice, many rules of Wargame buck the traditions of the RTS genre, or place a burden of knowledge on the player.

For instance, there is no fog of war: units rely on the Optics stat to determine if they can detect whether enemies are nearby. Recon units – helicopters in particular – are absolutely essential, and are therefore incredibly high priority targets. Take out their eyes, they won’t even know you’re there. Buildings, hills, forests, and even dense foliage along forsaken stretches of fencing all block line of sight. It’s common for units to hide, and for armies to rely on recon and counter-intel to ambush unsuspecting enemies.

Resources take the form of deployment points and ammunition. If a unit runs out of a specific type of ammunition (rockets, for instance) they are… well, out of ammo, and unable to fire that particular weapon until it’s restocked by a supply truck or other such vehicle. It’s a very well implemented and even elegant system that I very much appreciate.

Combat is unforgiving. Deeply so. Being caught out in the open, or by your unit’s counter, is a sure, swift and humiliating defeat. And more than combined arms is necessary – the counterplay of these units goes several levels deep, often requiring multiple types of aircraft and anti-air in addition to artillery, tanks, and infantry combined. Naval warfare and naval units have their place in the game: mainly, via amphibious infantry carriers and other shallow water units. Larger vessels exist, but aren’t used particularly often in my experience. Deep sea units and combat feel gimmicky beside the much more polished and refined air/ground combat mechanics, into which riverine units fit much more neatly.

Wargame is amazing. I love it, I’m addicted to it. It has tons to learn and master, and mechanics that I can only describe as deeply, satisfyingly delicious. But its learning curve, the burden of knowledge that goes largely unsupported, is undeniably and unavoidably steep. With an afterthought tutorial, and so much opacity involved both in what units to bring into combat and in actual engagements with the enemy, Wargame is uncaring towards the plight of new players, an attitude often adopted by the game’s community, which is at times shockingly virulent towards newbies.